Minnesota Vikings star wide receiver Adam Thielen has been nursing a sore hamstring, after initially hurting it Week 7 against the Detroit Lions. Thielen tried to return last Sunday against the Kansas City Chiefs, and he ended up taking himself out of the game in the first quarter after a handful of snaps because he wasn’t feeling like himself, according to Ian Rapoport, who also said it wasn’t a re-aggravation of the hamstring so much as Thielen realizing he wasn’t quite ready to go:

From The Aftermath: The #Vikings only had WR Adam Thielen (hamstring) for a few plays yesterday after he took himself out because he wasn't ready to play. Good chance they pull back and let it heal. pic.twitter.com/GG0Icrb1ZF

Thielen has missed practice all week, and early reports suggest he will not play Week 10 in the Vikings huge game against the Dallas Cowboys Sunday night. They were confirmed Friday when Thielen was ruled out Week 10:

This news does not bode well for the Vikings, or for those who own the talented wide receiver in their fantasy leagues. So what does this mean for Thielen’s fantasy outlook going forward? Hamstring issues can be quite nagging, and this one doesn’t seem like an exception. Here’s a breakdown of Thielen’s outlook over the coming weeks. 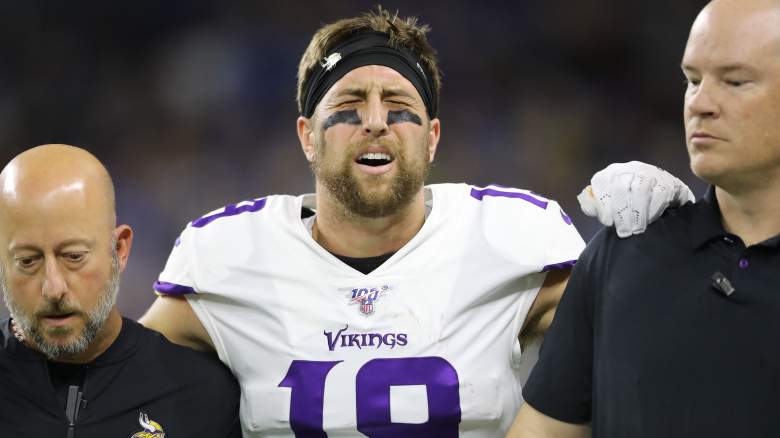 GettyVikings wide receiver Adam Thielen has been dealing with a hamstring issue since late October. He will likely miss Week 10, and could miss more time than that.

The Vikings have their bye week during Week 12, and while there’s a chance he could be back Week 11 against the Denver Broncos, there’s also a chance that he could rest through the team’s bye week.

Vikings head coach Mike Zimmer said that it was too soon to comment on how long Thielen will be out. Zimmer did make it clear this week that he didn’t feel as though he played Thielen too soon when he wasn’t ready to return. “No, he was not rushed back too soon,” he said when asked about it. Right now, it’s not looking like Thielen will be rushed back before the bye week.

Is Adam Thielen Worth Keeping on Your Fantasy Roster?

Right now, Thielen’s fantasy outlook isn’t so good. According to FantasyPros, if you have him in your league and you’re making a playoff push, you might want to get rid of him and find a suitable replacement ASAP:

“Thielen is expected to miss Week 10’s matchup against the Cowboys. The team has said that the injury isn’t expected to be ‘long-term,’ but it’s still not clear when he’ll be back. It wouldn’t be surprising if he also missed the team’s Week 11 matchup against the Broncos ahead of their Week 12 bye. As a result, those that are still pushing for the fantasy playoffs should consider trading Thielen as he could realistically not return to the field until Week 13, missing the next three weeks.”

We agree with FantasyPros on this. Looking at the rest of the Vikings roster, Stefon Diggs will likely see his numbers stay high, and there’s also Olabisi Johnson and Laquon Treadwell to consider. Both will likely see increased time in Thielen’s absence and could be worth picking up if at all possible, as Kirk Cousins will likely target. Johnson has two touchdowns this year, and Treadwell saw his production go up last week after Thielen left the game, so both would be suitable in a pinch. Either way, it’s looking like Thielen’s time in fantasy leagues is about done.

Read More
Football, Minnesota Vikings, NFL
Minnesota Vikings wide receiver Adam Thielen has been dealing with a hamstring injury. Here's a breakdown of his fantasy outlook and status for Week 10 and beyond.