Getty The Seattle Seahawks continue to be linked to Colin Kaepernick.

“The Seahawks will have a representative at Colin Kaepernick’s workout, a source tells me,” Henderson tweeted.

Seattle has Geno Smith as the current backup quarterback, who has experience as a starting quarterback from his time with the Jets. As an aside, Smith is also a perfect 2-0 in recent overtime coin tosses. It would not have been surprising if the Seahawks opted not to attend the workout, but a number of teams appear to be curious about how Kaepernick looks.

The Seahawks have a good deal of familiarity with Kaepernick as he was the 49ers quarterback during the height of their rivalry. When Nike launched an ad campaign with Kaepernick in 2018, Wilson stood up for his former opponent.

“I haven’t seen the Nike commercial,” Wilson told the Atlanta-Journal Constitution in 2018. “I’ve seen the ad thing. I think that ultimately us as a country right now we get distracted about so many different things, we’re fighting over all the wrong things. I think like I’ve always said it’s really about, it’s really about love and grace and how can we make this world a better place and I think that’s the intention more than anything else…As long as it surrounds love and grace and making this world a better place, that, that’s what I believe in.”

The Seahawks are one of just a few teams that hosted Kaepernick for a workout in 2017, but the team opted not to sign the quarterback. After the workout, Seahawks coach Pete Carroll called Kaepernick a “starter” and implied the Seahawks already had their QB1 in Wilson.

“Colin has been a fantastic football player and he’s going to continue to be,” Carroll said, per Kiro 7 Seattle. “At this time, we didn’t do anything with it, but we know where he is and who he is, and we had a chance to understand him much more so. He’s a starter in this league. We have a starter, but he’s a starter in this league and I can’t imagine that somebody won’t give him a chance to play.”

While the Seahawks opted not to sign Kaepernick in 2017, Carroll noted that it did not mean the team would not consider it at a later time. The timing of Kaepernick’s workout is a bit interesting given there is just a few weeks left in the regular season.

“The doors are always open to opportunities,” Carroll noted to ESPN in 2017. “We’re just going to try to do the best we can for our guys whenever the opportunity presents itself, and we’ll see. But as of right now, we know what we’re doing. He’s a great kid. He communicates well. He’s got a big world that he’s living in. He’s an NFL quarterback. He has other issues that he’s concerned about. He’s capable of being a championship guy. He’s demonstrated that over the years. He’s been up and down in his career some, but he’s shown enough upside that he can do that. I thought he presented himself really well.”

Multiple reports indicate that the workout has more to do with NFL teams’ interest in signing him for next season. This is also a bit odd given teams would more than likely want to work him out closer to the start of training camp to see how he looked. It will be interesting to see if the Seahawks or any other team will move from simply attending the workout to signing Kaepernick to a contract. 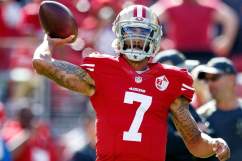 Colin Kaepernick Has Interest From NFL Teams & Will Host Workout