Getty Georgia takes on LSU in the SEC Championship.

LSU is a slight favorite over Georgia in the SEC Championship in a matchup with major College Football Playoff implications. LSU is a 2.5 point favorite in the opening line, per FanDuel.

LSU enters Atlanta with a perfect record but questions remain about the Tigers’ defense. Georgia’s lone loss to South Carolina looks more and more like an outlier. It was not the prettiest game against Georgia Tech, but Georgia still managed to leave Bobby Dodd Stadium with a massive victory.

The matchup features LSU’s explosive offenses against a stout Georgia defense. LSU’s offense ranks No. 2 in the country in total offense, while Georgia is No. 6 in total defense, per Daily Advertiser.

Georgia Will Be Without Lawrence Cager for the SEC Championship

Georgia is dealing with a number of injuries heading into the SEC title game. The team will be without Lawrence Cager, and D’Andre Swift sustained a shoulder injury against Georgia Tech. Georgia head coach Kirby Smart noted after the game that Swift is expected to play against LSU.

“He probably could have gone back in the game if he needed to,” Smart said, per Dawg Nation. “He knew that wasn’t what we needed to do, we needed to rest him and get him ready. He’s been a warrior and a leader of this team. His spirit we’ll need next week, because he’s got a lot of energy and emotion that we need.”

Bulldogs receiver George Pickens will have to sit out the first half of the title game after being ejected for fighting against Georgia Tech. Smart discussed his early thoughts on facing LSU in the team’s second straight game in Atlanta.

“They throw the ball really well, they’ve got one of the best backs I’ve seen on TV when he gets out there and breaks things open The backs and receivers from last year, we played them,” Smart noted, per 247 Sports. “The quarterback is incredible. He was that way last year. People don’t give him enough credit for the athlete he is. He’s a great basketball player, he does good things. We know what kind of good things they do. They’ve got good football players. Guess what? So does everybody else in the SEC.”

SEC Championship Pick: LSU’s Offense Is Too Much for Georgia

Georgia will have the benefit of once again playing in Atlanta which is a little more than an hour west of Athens. LSU fans are known to travel as well, and this will be especially true since its the Tigers first appearance in the SEC Championship in nearly a decade. LSU’s last SEC title game came in 2011 which also happened to be against Georgia.

LSU has been tested from start to finish this season and has looked like a more consistent team than Georgia. Georgia is one of the best defenses that LSU has faced this season, but it is hard to imagine the Tigers not putting up points. LSU’s defense does have questions but so does Georgia’s offense that has sputtered, at times.

Even if Georgia is able to cut down on LSU’s points, it is hard to imagine this Bulldogs offense keeping pace with the Tigers. LSU’s offense is the best unit in this game, and why the Tigers are likely to punch their ticket to the College Football Playoff. 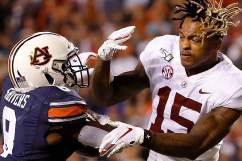