The NFL season is more than halfway over, and we are less than two months away from the start of the playoffs. We are breaking down the current NFL playoff picture heading into Week 11.

The postseason outlook is starting to take shape and one thing that is clear is how strong the NFC is so far this season. For example, the Seahawks are 8-2 heading into Week 11 and would only be the No. 5 seed if the postseason started today. Seattle’s win over San Francisco put them within one game of the division lead as well as the NFC’s No. 1 seed.

As a reminder, the top four seeds go to the division winners even if they have an inferior record than the Wild Card teams. The NFC West could feasibly take three of the six playoff spots if the Rams are able to make a run to close out the season.

There Are No More Undefeated Teams

In the AFC, the Chiefs have been hit by the injury bug and have some catching up to do if they want a first-round bye. The good news is Kansas City is getting Patrick Mahomes back and there is still plenty of games left for the Chiefs to regain their footing among the top teams in the conference. The Chiefs quarterback noted he is ready to go after dealing with a knee and ankle injury.

“I knew I had a chance once I talked to those doctors and they said as long as I was functioning well, moving well, I could play this week,” Mahomes told ESPN. “Coach [Andy] Reid still wanted me to take it day by day. I went out here in practice and took the reps and I haven’t had any pain or any setbacks, and so as long as we keep going with that I’m glad to be back out there.”

San Francisco was the only remaining undefeated team in the NFL, but the Niners fell to the Seahawks to open up the NFC race even more. San Francisco’s path gets much more difficult to close out the season, and we will see where the team lands after some of the challenging upcoming games.

Here is a look at the NFL playoff standings and matchups if the postseason started today. Teams listed in bold are currently slated to make the playoffs.

Here is a look at the current playoff matchups heading into Week 10.

Here is a look at the current AFC playoff matchups heading into Week 10.

No. 6 Oakland Raiders vs. No. 3 Houston Texans
No. 5 Buffalo Bills vs. No. 4 Kansas City Chiefs
Bye: No. 1 New England Patriots & No. 2 Baltimore Ravens 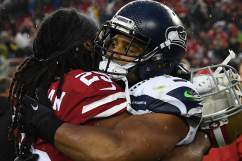 Read More
AFC, Football, NFC, NFL, NFL playoffs
Find out the latest on the NFL playoff picture with the NFC and AFC matchups. We break down the NFL postseason standings after Week 10.