“Tua, if you are listening to me here, man,” Wilson noted on the podcast. “Just keep working. Keep the prayers up, man. Just keep praying. Keep healing up. Great things are in store…I texted him just to let him know. We’ve been texting throughout the year. Just been rooting for him. That’s just a tough one for them and for him, but I know that if anybody can overcome it he can. [He has] strong faith, great work ethic, great attitude…But he’ll come back and he’ll be back in the NFL. He’ll make his presence known.”

Tagovailoa has been ruled out for the remainder of the season, but Alabama released a statement noting that the quarterback underwent successful surgery. Alabama’s team orthopedic surgeon Dr. Lyle Cain noted the “procedure went as planned.”

“The procedure went as planned, and he is resting comfortably,” Cain said, per CBS Sports. “Tua’s prognosis is excellent, and we expect him to make a full recovery.”

Wilson Believes Tagovailoa Will Be a “Star in the NFL”

Meet Hawk’s Receiver Malik Turner | 49ers Game Recap | Best of Luck to Tua TagovailoaWe are back after one-week off! We hope everybody had a great bye week. This week wide receiver Malik Turner joins the podcast to let fans know a little bit more about him! The guys start by recapping the 49ers game (1:40). Malik then talks about his love for shoes and custom cleats, and his work with the non-profit organization – Uplifting Athletes (7:30). Last the guys dive into the “What’s Hot?” Segment; covering Disney+, Tua Tagovailoa’s injury, and the Brown’s/Steelers fight (15:05). Subscribe to Russell Wilson's Channel: https://www.youtube.com/c/dangerusswilson The official Youtube Channel of the Seattle Seahawks Quarterback Russell Wilson. Facebook: https://www.facebook.com/DangerRussWilson/ Twitter: https://twitter.com/DangeRussWilson/ Instagram: https://www.instagram.com/dangerusswilson/ Follow some of my other favorite Youtube Channels. Ciara: https://www.youtube.com/c/ciara West2East Empire: https://www.youtube.com/channel/UCgQMcL7KwOhUuXgtmfzHbcg Seattle Seahawks: https://www.youtube.com/user/seahawksdotcom2019-11-20T00:47:59.000Z

One of the big questions after Tagovailoa’s injury is what the Alabama quarterback will end up doing for the 2020 season. Prior to the injury, Tagovailoa was projected by many to be the first quarterback selected in the 2020 NFL draft. Wilson emphasized that he believes Tagovailoa has what it takes to be a “star in the NFL.”

“It’s just sad, you know, the guy works so hard coming back from injury,” Wilson explained. “The guy plays tough as nails, just been playing through everything, the ankle and all that stuff. He’s been such a great college quarterback. He’ll be great in the NFL, too. He’s going to be a star in the NFL, I really believe that. He’s got great composure, the demeanor. He’s got great faith, just great talent. A lot of great things about him and he’s a winner. At the end of the day, he’s a winner and he knows how to win. He’s been in an NFL-type offense, so he’ll get a chance.”

Nick Saban Described the Alabama Quarterback as Being in “Good Spirits”

Tua Tagovailoa carted off with hip injury vs. Mississippi State | College Football HighlightsAlabama QB Tua Tagovailoa exited the game with an injured hip after being dragged down by tacklers late in the first half. Tagovailoa had started the game 14-for-18 for 256 yards and two touchdowns vs. Mississippi State before the injury. The Crimson Tide would go on to win the game 38-7. ✔ Subscribe to ESPN+ https://plus.espn.com/ ✔ Get the ESPN App: http://www.espn.com/espn/apps/espn ✔ Subscribe to ESPN on YouTube: http://es.pn/SUBSCRIBEtoYOUTUBE ✔ Subscribe to ESPN FC on YouTube: http://bit.ly/SUBSCRIBEtoESPNFC ✔ Subscribe to NBA on ESPN on YouTube: http://bit.ly/SUBSCRIBEtoNBAonESPN ✔ Watch ESPN on YouTube TV: http://es.pn/YouTubeTV Exclusive interviews with Rachel Nichols https://urlzs.com/jNURe Stephen A. Smith on ESPN https://urlzs.com/W19Tz ESPN on Social Media: ► Follow on Twitter: http://www.twitter.com/espn ► Like on Facebook: http://www.facebook.com/espn ► Follow on Instagram: http://www.instagram.com/f/espn Visit ESPN on YouTube to get up-to-the-minute sports news coverage, scores, highlights and commentary for NFL, NHL, MLB, NBA, College Football, NCAA Basketball, soccer and more. More on ESPN.com: http://www.espn.com2019-11-16T22:53:32.000Z

Bleacher Report draft analyst Matt Miller admitted after the injury that he would be surprised if Tagovailoa entered the draft in 2020. The quarterback still has a long road towards recovery and could opt to put his NFL plans on hold until 2021. After the surgery, Alabama head coach Nick Saban described the quarterback as being in “good spirits.”

“I talk to him every day. … He’s in good spirits, and he’s doing well,” Saban told 247 Sports. “I think all the indications from the surgery have been really positive from a medical standpoint. … I think he’s got a really good understanding of what he’s looking at.” 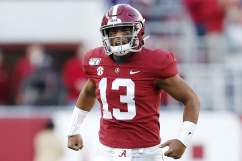