Getty The Texans came up with a big upset victory over the Patriots.

With a month to go before the playoffs begin, we have a tight race in the AFC postseason standings. The Ravens and Patriots hold the top two AFC seeds if the playoffs started today.

Thanks to the Patriots’ loss to the Texans, the Ravens are now the No. 1 seed as they own the head-to-head tiebreaker over New England. If the Patriots are hoping to have a home-field advantage in a potential AFC Championship game, New England will need to finish a full game ahead of Baltimore.

There is still time for teams like the Chiefs and Texans to gain even more ground in the race for a first-round bye. The Patriots-Texans matchup was the marquee AFC game of Week 13, and Houston dominated New England to make a jump in the standings.

The Texans now have a firm grip on the AFC South, while the Patriots have the Bills at their heels after their upset of the Cowboys on Thanksgiving. After the game, Deshaun Watson admitted he wanted to win at least one game against the “G.O.A.T.” [Tom Brady] before he retired.

Despite the Patriots’ success, New England’s offense has had a slow start to the season. Tom Brady believes the team will find their stride before the postseason.

“Being in the position I’ve been in for 20 years, and seeing the evolution of our offense, and having experience, I do feel like I have some accumulated knowledge of what it takes to be a high-caliber offense,” Brady said, per Boston Herald. “And we’re working to get there. I know we haven’t found our stride quite yet, but we’re working hard to find it. There’s times where you find it early in the season, there’s times when you find it late in the season. The point is, everyone is working hard together in order to try to be the best this version of this team can be.”

Things do not get any easier for the Patriots as they get a rematch of last season’s AFC Championship against the Chiefs. It will be interesting to see if the offense can perform better than what we have seen in recent weeks.

Click here to see the full NFL playoff picture for both the NFC and AFC.

Here is a look at the AFC playoff picture after Week 13.

Teams in bold would make the postseason if the playoffs started today. The top two seeds get a first-round bye and host a playoff game in the Divisional Round.

Here is a look at the current AFC playoff matchups.

No. 6 Pittsburgh Steelers vs. No. 3 Houston Texans
No. 5 Buffalo Bills vs. No. 4 Kansas City Chiefs
Bye: No. 1 Baltimore Ravens & No. 2 New England Patriots 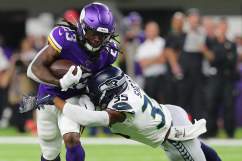 Read More
AFC, Football, NFL, NFL playoffs
With the Texans win over the Patriots, find out the latest AFC playoff standings. We break down the AFC Wild Card and playoff picture.