Getty Baylor has a chance to make the College Football Playoff with a win over Oklahoma.

If Georgia wins the SEC Championship, it likely does not matter who wins the Big 12 title. Both Oklahoma and Baylor need a victory in the Big 12 Championship combined with a Georgia loss to punch their ticket to the College Football Playoff.

Heading into conference championship weekend, Baylor was ranked No. 7 while Oklahoma sits at No. 6. It was expected to be a tight race between the Big 12 and Pac-12 champions for the final playoff spot.

However, Oregon’s upset over Utah means the Utes were eliminated from contention. This makes the Big 12 title game essentially a play-in game unless Georgia pulls off the upset over LSU. Before Utah’s loss, Baylor head coach Matt Rhule campaigned for the Big 12 champion to make the tournament.

“I personally would like to see the Big 12 champion go to the College Football Playoff year in and year out,” Rhule told the Dallas News. “How that works out, I don’t know. I just think if you win this league and you play nine league games, plus a 10th game when you play a rematch, I think that you should have a chance to play. What good is having a national championship if it’s not national?”

LSU, Clemson and Ohio State remain as the only undefeated teams heading into the conference title games. Unless one of these teams is embarrassed in their conference championship, all three squads are likely already in the College Football Playoff.

LSU may drop in the rankings with a loss, but they are unlikely not to remain one of the four teams. This means a Georgia victory would likely put two SEC teams into the playoff leaving either Baylor or Oklahoma on the outside looking in.

Fans may never know who the committee would have selected between Utah and the Big 12 champion if the Utes had defeated Oregon. Baylor’s non-conference schedule is believed to have hurt their chances, but it will not matter unless Georgia defeats LSU.

Heading into the final weekend, Georgia was ranked No. 4 despite a bad loss to South Carolina. A win over an undefeated LSU would punch the Bulldogs’ ticket to the playoff, but it is unlikely that the Tigers would be ranked behind the Big 12 champion even with a loss. Georgia head coach Kirby Smart explained why LSU’s Ed Orgeron has been so effective as the Tigers head man.

“Everyone has respect for Coach O. No. 1, he’s a great person,” Smart told the Atlanta Journal-Constitution. “He’s fun to be around. … I remember as a young coach, you would hear these stories about Coach O, and they were just crazy stories. I mean, you heard all these things. He’s got such a charisma about him and a character about him that you enjoy being around him.” 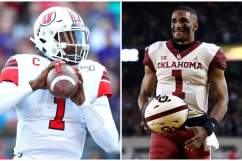