Getty Bryce Perkins and Virginia squares off with Florida in the Orange Bowl.

Bryce Perkins has been one of the most exciting quarterbacks in college football causing many fans to wonder about his NFL draft stock. Perkins is absent from many of the rankings for top NFL quarterback prospects and projects to be a Day 3 pick. There is still time for Perkins to improve his stock during the pre-draft process.

Perkins is a dynamic playmaker but talent evaluators are still curious about his ability to throw from the pocket. Pro Football Focus’ Mike Renner had Perkins as his No. 64 ranked quarterback among those playing in a bowl game.

Perkins’ pocket presence is nearly nonexistent, as he scrambled 48 times and took 44 sacks on 550 dropbacks. He has had a rough 31.1 passing grade when faced with pressure this season.

With the NFL embracing players like Lamar Jackson and Patrick Mahomes, Perkins believes he can succeed at the next level.

“I feel like my ceiling is high,” Perkins told the Sun-Sentinel. “I haven’t reached my potential yet, and how the NFL is shifting, there’s room and there’s a place for my style of play. … It’s going to give a lot of guys chances, and I feel like I fit right into that…There’s always going to be doubts, and there are always going to be like, ‘Well, you should play this.’ Just being as a black man and not being a traditional image of what a quarterback has looked like, there’s going to be people saying this and that, saying you shouldn’t play this because that’s not what they’re used to.”

Perkins threw for 3,215 yards, 18 touchdowns and 11 interceptions while completing 64 percent of his passes this season. Perkins also rushed for 923 yards and 9 touchdowns showing he is a big threat with his legs. The Draft Network’s Joe Marino offered his analysis of Perkins strengths and weaknesss.

Dangerous as a runner when extending plays and taking off with the ball in his hands. The way he has invigorated a usually stale offense at Virginia is notable. Usually keeps his eyes down the field when pressure comes…

A high variance passer that isn’t going to be consistent with his reads or accuracy. Has one-read tendencies and he isn’t the most effective working through progressions.

Where Perkins will get drafted is still yet to be determined, but there is enough for NFL teams to work with to make the Virginia quarterback worth the risk of using a Day 3 pick. Perkins is unlikely to be a starter to begin his NFL career, but we have seen players like Gardner Minshew go from being late-round picks to finding the field quickly.

Perkins could start out being utilized the way the Saints use Taysom Hill in special packages. It is worth emphasizing that Perkins helped transform an otherwise irrelevant Virginia football program and his career included a rare win over rival Virginia Tech and an Orange Bowl appearance. All it takes is one NFL team willing to select Perkins and have patience as he develops as a pro. 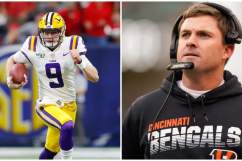