Ahead of Sunday’s AFC Championship game rematch against the New England Patriots in Foxboro, Kansas City Chiefs quarterback Patrick Mahomes made a bold claim about Patriots gunslinger Tom Brady, saying the 42-year-old could play “at least a couple more years” in the NFL.

Patrick Mahomes has the utmost respect for Tom Brady ? pic.twitter.com/yW9woD1SUh

“I’ve known for a while that it’s not going to be the last year any time soon,” the reigning league MVP said Wednesday. “He’s still playing at a high level. Unless he just doesn’t want to play, which I don’t see, I expect to see him for at least a couple more years.”

The 24-year-old added: “Whenever you play a guy like this, who has won all these championships, you want to go out there and give your best effort obviously. And you want to try and find a way to win. But at the same time, it’s a team game, and we’re going to go out there and try to do whatever we can to come out with the win.” 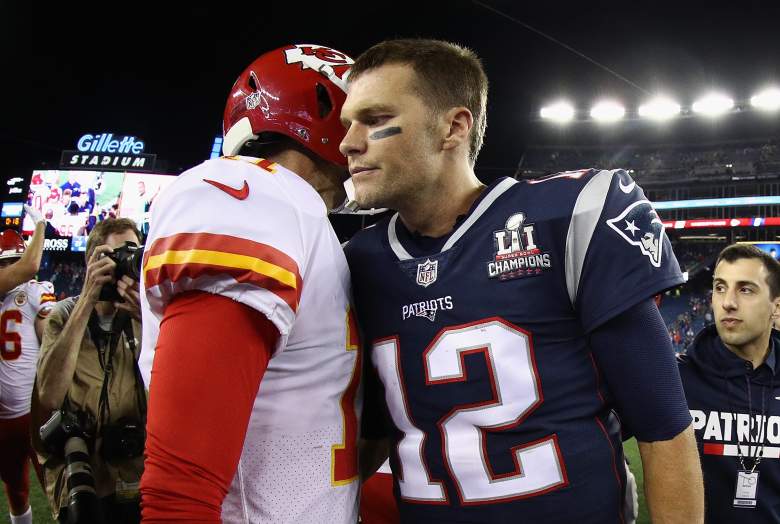 The last time Kansas City beat New England at home was on September 7, 2017 with the score being 42-27. (Photo by Maddie Meyer/Getty Images)

In his two years as a starter for Kansas City, Mahomes has played Brady and the Patriots twice, losing in both contests. Speaking with WEEI’s The Greg Hill Show Monday, the reigning Super Bowl champion also heaped on the praise for the rising star, adding some extra compliments for Kansas City’s offensive unit as well.

“He’s pretty spectacular. I think very highly of him and his skill set, and he’s a very good player. They have a very good team and a very good offense. They have very dynamic receivers—one of the best groups in the league. They’ve got one of the best tight ends in the league, they have some great running backs, and Patrick distributes the ball to all of them, and it makes it very hard to defend when you have a lot of players you can get the ball too.”

“That might be the first time my toe’s ever been on the injury report,” Brady said. “You know us Patriots. We’re pretty diligent about listing everything, so I guess we have to make mention of my toe now as well.”

The veteran added: “Isn’t there some HIPAA violation or something like that, when I start talking about all my injuries? I’m doing pretty good. At this time of the year, I’ll take it. I’ll take anything if I’m still able to go out there and feel like I can play my best. I’m feeling really good, really positive about this week. We have a really great challenge ahead of us.”

Whether he ultimately suits up on Sunday or not, Brady emphasized the importance of Sunday’s match, especially because it has playoff ramifications for both teams.

“It is going to be a very, very tough game,” the father of three said. “Hopefully we can go out there and play with the fire and energy we have, and go out there and have a great performance.”

As Brady makes every effort to be ready by Sunday afternoon, one Chiefs player’s season is over. On Thursday, Kansas City announced that running back Darrel Williams was officially placed on injured reserve.

We have elevated DB Alex Brown to the 53-man roster from the practice squad.

WR Gehrig Dieter has been signed to the practice squad.

RB Darrel Williams has been placed on injured reserve. pic.twitter.com/sQeybYwtwq

Williams suffered a hamstring injury in last Sunday’s 40-9 win against the Oakland Raiders. The 24-year-old finishes this campaign with 41 carries for 141 yards and three touchdowns, and 15 catches for 167 yards and a score, and one fumble lost.