Getty The Eagles are fighting for the playoff hopes.

The Eagles’ playoff hopes hinge on the outcome of their Week 16 matchup with the Cowboys. Philadelphia has a 34 chance to make the postseason heading into Week 16, per The New York Times’ Upshot projections. A win over the Cowboys would boost their odds up to 69 percent, while a loss would eliminate the Eagles from playoff contention. The Cowboys would win the NFC East with a win over the Eagles.

Philadelphia’s work is not done even if they defeat the Cowboys as a loss to the Giants in Week 17 would drop their postseason chances all the way down to 22 percent. The Eagles still control their own destiny as Philadelphia is headed to the postseason if they win their final two games. If the Eagles end up tied with the Cowboys at the end of the season after the teams split their two matchups, 94 WIP detailed the tiebreakers that would apply.

If the Eagles win in Week 16, and end the season with the same record as the Cowboys, the next tie breaker would be divisional records. If both teams win the games they are supposed to, and the Eagles beat the Cowboys, they would each finish the season 5-1 in the NFC East, moving it to the third tie breaker. The Eagles are currently 3-1 in the NFC East with two games remaining in the division, the Cowboys are currently 4-0 with two games remaining in the division.

The NFC East Champion Will Host a Playoff Game as the No. 4 Seed

Either the Eagles or Cowboys will benefit from the NFL playoff rules. The NFC East champion will be the No. 4 seed and will host their opening playoff game despite likely having a worse record than their opponent. The top four seeds in each conference automatically go to the division winners who all host at least one postseason game.

Here is a look at the Eagles playoff standings. We will be updating the info below after the Week 16 matchups.

No. 6 Minnesota Vikings vs. No. 3 Green Bay Packers
No. 5 Seattle Seahawks  vs. No. 4 Philadelphia Eagles
Bye: No. 1 San Francisco 49ers, No. 2 New Orleans Saints 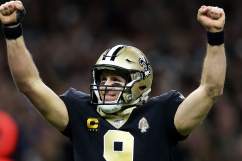