Getty The Seahawks enter the 2020 NFL season with lofty expectations.

Seattle Seahawks quarterback Russell Wilson made a bit of a revelation as he celebrated his birthday over Thanksgiving week. Taking a page from Tom Brady, Wilson noted that he wants to continue playing football until he is 45 years old.

“I’ve always wanted to go for 45,” Wilson said, per Seahawks.com. “That’s kind of just longevity playing. I think, for me, every year is you’re invested to your body. You’re invested into your mind, your soul, everything else. The game. As you go, you get even stronger and you get even better I feel like. Even more wisdom. I think that helps a lot.”

Wilson just turned 31 which would mean the Seahawks quarterback is looking to play at least another 14 seasons. It is a lofty goal and something Wilson adjusted a bit after initially saying he wanted to play for 20 seasons. Wilson is playing in his eighth season and won the starting job for the Seahawks during the preseason of his rookie year. Wilson explained that he feels energized and physically in a good place.

“In my eighth season, I feel like I’m just getting started,” Wilson noted, per Seahawks.com. “I feel like I haven’t done anything yet. That’s a good feeling. I’m fortunate to be able to play every game and be out there every play. I think that, for me, I feel really young. I feel more vibrant than ever. I feel fast. I feel strong. My arm feels great. My mind feels better. Heart feels even better than that. I think just everything – we’ve got a great organization, great people around me. I think I’ve just invested in my body and my mind, making sure that my mind is ready to go every week and every season.”

Wilson Is One of the Favorites to Win the NFL MVP

Wilson is having the best season of his career and is a big reason why the Seahawks are one of the top teams in the NFC. Lamar Jackson is the MVP favorite with -275 odds, but Wilson is in second at +250 heading into the final month of the regular season, per OddsShark.

More important for Wilson than individual awards is becoming a quarterback with multiple Super Bowl rings. Wilson believes there are some similarities between this year’s Seahawks and the Seattle squad that won a Lombardi Trophy in 2014.

“Yeah, I definitely think we have a lot of similarities,” Wilson told USA Today. “I think we have all the ability in the world. There’s nothing that this team can’t do, and I think it’s about each other and it’s about how we’re going to go accomplish it together, so we’re excited about the opportunity.”

Wilson’s goal to play until he is 45 may seem lofty, but the quarterback has defied expectations since he entered the NFL. Wilson slipped to the third round in the 2012 NFL draft, and it was mostly tied to his height.

It is no coincidence that we have seen smaller quarterbacks (Baker Mayfield and Kyler Murray) be selected with the No. 1 pick after the success Wilson has had. Wilson is now the first quarterback to have a winning season in each of his first eight years, per Clutch City. Seahawks head coach Pete Carroll has admitted this season that Wilson has been playing the best of his career.

“I didn’t know that was coming [eight straight winning seasons,” Carroll noted to 97.3 KIRO FM, per Clutch City. “That’s a great marker. He’s had a career already of first where he’s just done things so well coming out of the chutes and all that to put up numbers and consistency and all that kind of stuff.” 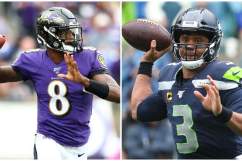