The Seahawks signed a former running back but not the one fans are waiting for in Seattle. The Seahawks are bringing back Robert Turbin, but Marshawn Lynch remains unsigned, per NFL Network’s Mike Garafolo.

“#Seahawks are still working through the Marshawn Lynch meeting and physical. Meanwhile, they’re expected to sign RB Robert Turbin, sources say. One reunion about to go down, another still in the works,” Garafolo tweeted.

Turbin last played in the NFL for the Colts in 2018 and spent his first three seasons with the Seahawks. It remains to be seen whether the Seahawks will close a deal with Lynch, but all signs point to Seattle also bringing back the iconic rusher. ESPN’s Adam Schefter reported that Lynch is in Seattle undergoing his physical.

“So the Seahawks signed RB Robert Turbin and Marshawn Lynch is now taking his physical with Seattle,” Schefter noted on Twitter.

NFL Network’s Ian Rapoport reported that Lynch’s physical went well and his return to the Seahawks is “closer to reality.”

“The #Seahawks’ physical for FA RB Marshawn Lynch went well and as expected, source said. No issues there, as a signing and reunion moves closer to reality,” Rapoport tweeted.

Seahawks head coach Pete Carroll noted on his weekly radio show that there was a “really good chance” Seattle will sign Lynch. Everything appears to be pending their meeting, and Lynch passing a physical.

“He’ll be flying in here this morning and we’re gonna give him a really good chance to come back and play for us…I think it’s freakin’ great if he could get back out there and tote the ball for us,” Carroll said, per 710 Seattle.

Turbin reportedly worked out prior to Week 16, but the Seahawks did not sign him at the time. Seattle lost Chris Carson with a hip injury and C.J. Prosise with a broken arm against the Cardinals. The Seahawks were already without Rashaad Penny who was placed on the injured list earlier this season.

Carroll described Lynch as being in good shape but noted the team would still have to put him through a physical to make sure he would be able to play football again. Overall, Carroll spoke glowingly of the former Seahawks running back, and Turbin’s signing does not mean the team will not sign Lynch. Given the Seahawks lost two running backs, the team likely needs to sign at least two rushers this week prior to their showdown with the Niners.

The Seahawks Maintain a Good Relationship With Marshawn Lynch

The Lynch story started as Seahawks fans hoping Seattle would bring back the star running back. Reports surfaced that the Seahawks would be open to meeting with Lynch, then Rapoport reported that Lynch was flying to Seattle to discuss a comeback.

“Marshawn Lynch and the #Seahawks are open to a reunion, and Lynch has told people he plans to travel to Seattle today to discuss it, sources tell me, @MikeGarafolo and @TomPelissero. #BeastMode could be back in Seattle,” Rapoport tweeted.

Carroll’s comments exploded the rumors as the coach admitted the team wanted to bring back Lynch. Rapoport also noted that the team maintained a good relationship with Lynch.

“The #Seahawks have a loooong history with Marshawn Lynch, but the organization and BeastMode have always maintained a great relationship. That helps in times like this,” Rapoport explained on Twitter. 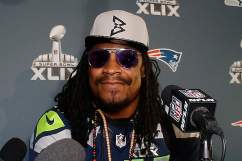 Marshawn Lynch Has ‘Really Good Chance’ to Sign With Seahawks