Seahawks running back Rashaad Penny’s ACL injury will sideline him for the rest of the season the team announced. Seahawks head coach Pete Carroll noted that doctors viewed it as a “significant injury,” per ESPN’s Brady Henderson.

“Pete Carroll said Rashaad Penny will miss the rest of the season after injuring his ACL last night. Carroll said he hasn’t heard about the MRI results but that the doctors “could tell it’s a significant injury,” Henderson tweeted.

NFL Network’s Ian Rapoport reported that Penny will be out until training camp and has “additional damage to his knee.”

“#Seahawks RB Rashaad Penny tore his ACL in last night’s loss to the #Rams and is out for the season, source said. The MRI confirmed the news for the former first-round pick, who also has additional damage to his knee. He’s out until training camp. Tough injury,” Rapoport explained on Twitter.

Penny sustained the injury early in the first quarter on a tackle in the Seahawks-Rams Week 14 matchup. The Seahawks running back crawled to the sideline in pain and was ruled out for the game just a few minutes after the play.

C.J. Prosise Is Expected to Take Over as the Seahawks RB2

Once Penny was ruled out against the Rams, C.J. Prosise took over as the Seahawks’ backup running back on Sunday night with mixed results. Henderson also noted that Travis Homer should be in the mix to spell lead-back Chris Carson as well.

“Asked on @710ESPNSeattle about the Seahawks’ tailback options behind Chris Carson in light of Rashaad Penny’s knee injury, Pete Carroll again mentioned C.J. Prosise first and more often than rookie Travis Homer. Giving the impression that Prosise will slide into the No. 2 role,” Henderson noted on Twitter.

“He’s he got an ACL sprain and we don’t know how serious it is, but it’s significant,” Carroll noted, per Seahawks.com.

Prosise’s status each game has fluctuated, but the running back was active against the Rams. Carroll elaborated on the Seahawks game plan if Penny was forced to miss an extended period of time as is now the case.

“The obvious thing is that (Seahawks RB) C.J. (Prosise) steps up,” Carroll explained, per Seahawks.com. “We were able to get C.J. up this week. He hasn’t played in quite awhile now, so we’re very fortunate to have C.J. coming up. And (Seahawks RB Travis) Homer is still available to us.”

It is unfortunate news for Penny who was just starting to find his footing this season. After being selected by the Seahawks with a first-round pick in 2018, Penny has had a slow start to his NFL career. Penny started to hit his stride during the second half of the season and became a nice compliment to Carson during games.

Penny’s loss is a significant blow to the Seahawks’ offense who struggled against the Rams. The Seahawks running back took to Twitter to send a positive message to Seattle fans.

“GOD makes no mistakes. Love you 12s . Thank you for the support??,” Penny tweeted.

Carson responded to Penny’s tweet emphasizing that his teammate would come back stronger after the injury.

“Don’t even trip !! you comin back strong ! BELIEVE DAT ‼️‼️” Carson noted to Penny on Twitter. 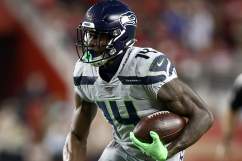