Four years ago, Aaron Gordon lost in the NBAs’ Slam Dunk Contest despite wowing the crowd. Zach LaVine was simply too electric and ended up taking home the honors in Toronto during that weekend’s festivities.

This year, Gordon will return to the contest, a source tells Shams Charania of The Athletic. Los Angeles Lakers center Dwight Howard and Miami Heat Forward Derrick Jones Jr. are the only other commitments so far. 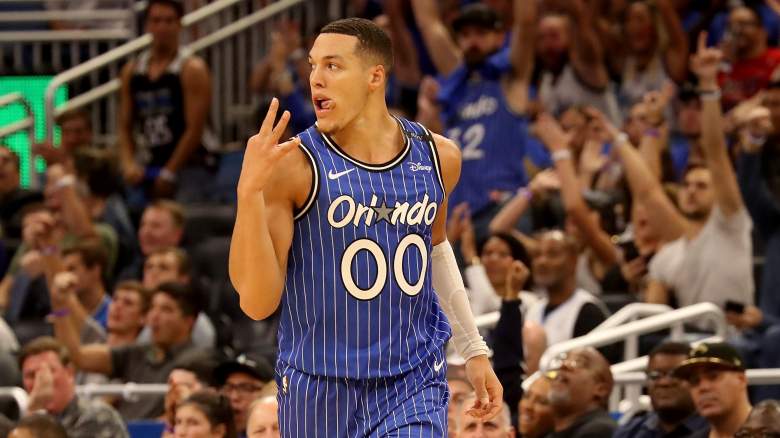 GettyAaron Gordon of the Orlando Magic.

Gordon is a member of the Orlando Magic, though he could be on the move before the February 6 trade deadline. The Minnesota Timberwolves had an interest in the explosive big, having offered a package to the Magic for him earlier in the season. It’s not clear what exactly was offered, though we know that the team turned it down.

The former No. 4 overall pick was not drafted by the current regime in Orlando. The team has brought in several young frontcourt players in recent years, including Jonathan Isaac and Mo Bamba. Not to mention the team just re-signed Nikola Vucevic to a four-year deal. The paint is crowded.

Gordon, who doesn’t turn 25 until next September, should garner interest from other teams if the Magic make him available. The financials behind Gordon make him an even more attractive trade target. The big man makes $19.9M this season, though his contract is one of the rare ones that decrease in value year-over-year. He’ll make $18.1M next season followed by just $16.4M in the 2021-22 campaign.

We’re starting to get a feel who will be in Chicago for the NBA’s 2020 All-Star weekend. The starters for the contest were recently announced.

James, who was the top vote-getter in the Western Conference and the entire NBA, will again be a team captain. Kawhi gets his fourth All-Star nod, all of which have come over the past five seasons. Davis is onto his seventh consecutive All-Star appearance (his rookie year is the only season he missed) and Harden will make it eight-for-eight on All-Star appearances since joining the Rockets. Finally, Doncic will play in the game for the first time of what is expected to be many for the second-year guard.

While the starters were selected by conference, the rosters will be shaken up for the All-Star game itself, with Giannis and LeBron drafting four starters apiece.

READ NEXT: Sixers Joel Embiid Wears No. 24 To Kobe Byrant