Getty Ed Orgerons voice has quite a unique sound.

LSU head coach Ed Orgeron has a unique voice and the sound can be hard for fans to distinguish. Orgeron is from Larose, Louisiana the heart of cajun country. During interviews, the LSU coach often emphasizes that the team is playing for the “great state of Louisiana.” Down in Larose, people know Orgeron by his nickname of “Bebe.”

Oregon’s voice is endearing to many in Louisiana, but it may have prevented him from landing the USC job after he was named the interim coach of the Trojans. The Athletic’s Bruce Feldman noted on The Rich Eisen Show that former USC athletic director Pat Haden “couldn’t get past what Ed Orgeron sounded like,” per FanSided.

Specifically, Feldman said certain people in the Pat Haden administration “couldn’t get past what Ed Orgeron sounded like.”

Robin White is an associate professor of English and French at Nicholls State University and explained to The Washington Post why Orgeron may sound funny to some fans. Orgeron’s accent is a mix of Southern, French and with a little bit of cajun mixed in for good measure.

Orgeron’s voice has prompted plenty of impersonations from players, coaches, and media members. The LSU coach does not seem to mind the jokes and has never lost his sense of pride for where he comes down. Orgeron is paid handsomely as the LSU head coach, but Coach O still considers himself part of the working class in the heart of Louisiana.

“I do feel like I’m representing them,” Orgeron told Sports Illustrated. “They know I’m part of them. Cajuns all of our lives, we fought. None of us grew up rich and we had to fight for everything we had. We had some heart about ourselves and some character.” 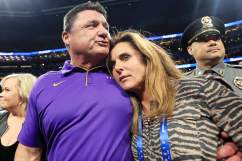