It was not the cleanest game for the Seattle Seahawks but the team still had a chance to pull off a comeback in Green Bay with just a few minutes remaining. The Seahawks had an opportunity to continue a potential game-winning drive, but Pete Carroll opted to punt the ball on fourth-and-11 with three minutes remaining in the game.

It was the final example of another conservative play-call in a game that needed aggression. Carroll was hoping to pin the Packers deep in their own territory, but the punt went into the end zone for a touchback. The Packers went on to make critical first downs, and the Seahawks were never able to get the ball back.

Seattle had all three of their timeouts remaining and still would have had the opportunity to stop the Packers offense even if the Seahawks were not able to convert on fourth down. It was just the final example of the team’s conservatism in the Divisional Round that played a role in the Seahawks watching the NFC Championship from home.

The Seahawks stuck with their game plan to establish the run even when it was clear that it was not working. The Packers did have one of the NFL’s worst rushing defenses during the regular season but were able to stifle the Seahawks’ running backs. Seattle was never able to get their running game going at the end of the season once Chris Carson was injured.

Seattle’s commitment to running the ball even with continued diminishing returns led to too many third-and-long situations early against the Packers. Trailing by nearly three touchdowns, the Seahawks began to open up the playbook in the second half and quickly got back in the game. Russell Wilson connected often with Tyler Lockett for multiple big plays.

Wilson also utilized his legs to pick up first downs on his own. It is fair to wonder how the game might have ended if the Seahawks had made an adjustment and allowed Wilson to cook sooner. Carroll’s decision to punt on fourth down was just the final example of conservatism greatly diminishing the Seahawks’ chances of advancing.

Carroll Gave “No Thought” to Going For It On Fourth Down

NBC Sports’ Joe Fann reported that the team did not consider going for it on fourth down. Carroll cited the great odds of fourth-and-long as the reason for punting with less than three minutes remaining.

“Pete Carroll said he gave no thought to going for it on 4th-and-11. Punting was always the move from there. Odds too great to pick up a first down at that distance. I asked if there was a lack of urgency to get punt team out there and he didn’t want to go down that path,” Fann noted on Twitter.

The Seahawks team had plenty of flaws and still managed to overachieve in many ways this season. Seattle won their share of close games this season despite often digging themselves a hole early in the contest. The odds were against the Seahawks converting on fourth down, but Wilson had been gashing the Packers’ defense for the majority of the fourth quarter.

With how the game played out, handing the ball to Wilson with the game on the line was the safer bet than relying on a shaky defense. Carroll should be credited for many things this season, but Seahawks’ games all too often played out in similar fashion. The Seahawks offense thrived once Wilson was able to make plays and was often stagnant when the coaching staff reined in the playcalling early in games.

This was not the Seahawks defense of old that could consistently win low-scoring affairs. The Seahawks blueprint during the Carroll era has been to rely on a punishing rushing attack and stout defense.

By the playoffs, the Seahawks did not have either of these items on a consistent basis. Their only chance of advancing was to allow Wilson to make plays and the team was almost able to recover once they handed over the game to their franchise quarterback.

Wilson needed a little fourth-down heroics to add yet another signature postseason moment to his resume. Instead, the Seahawks punted on the NFC Championship. 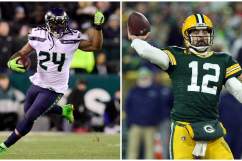