Prior to the team trading him away in 2014, he was the last remaining player from the 2011-12 squad that lost to Kevin Garnett’s Boston Celtics in Uncut Gems (also in the Eastern Conference playoffs in real life). The beginning of The Process started before Young was jettisoned from the club and it may make sense for Philadelphia to bring him back via a trade with his newest club, the Bulls.

Thaddeus Young’s Signing With the Bulls

Young signed with Chicago thinking he could be a veteran that helped the inexperienced team breakthrough and making the playoffs. He thought he would have a major role and be given some crunch time opportunities. That wasn’t the case when the Bulls were at full health earlier this year.

“I’m just playing basketball. I’m a Chicago Bull. Whatever happens happens. I understand it’s a business,” Young told K.C. Johnson of NBC Sports Chicago. “If I’m traded, I’m traded and have to go to the next city. If I’m not, then I’m here with my brothers, here with my teammates, and ready to fight.”

Young has seen more playing time recently as a result of injuries to the Bulls’ frontcourt. Wendell Carter Jr. remains out with an ankle injury. Rookie Daniel Gafford is sidelined with a thumb injury and Lauri Markannen is expected to miss 4-6 weeks with a pelvis injury. Young, who has started the past two games for Chicago, is benefiting from being one of the last men standing in the frontcourt.

The Clippers have interest in trading for Young, as they feel he could be a good addition to their frontcourt rotation. It’s clear that neither Kawhi Leonard or Paul George wants to play the four, at least during the regular season, and Young would be a great candidate for the job.

The Sixers could also use someone with Young’s skill set. Acquiring him would allow Brett Brown to have another piece in the frontcourt to play alongside both Joel Embiid and Al Horford, keeping each more well-rested for a hopeful playoff run. 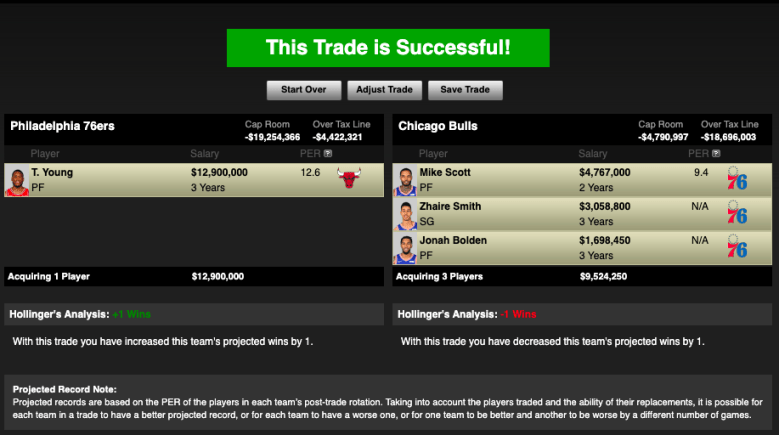 Young is making $12.9M this season in the first year of his three-year contract and A package of Mike Scott, Zhaire Smith, and Jonah Bolden would work salary-wise. Getting Chicago to agree to this deal isn’t going to be the easiest feat, as they would have to waive two players in addition to giving up Young, though perhaps an added second-round pick lessens the burden.
The former no. 12 overall pick will be 34 when his three-year, $43.6M contract expires, though, with his game transforming, his lack of youth shouldn’t be seen as a major concern. Young has embraced the three-ball this season more than ever, something that should allow him to thrive later in his playing career.
“I think that’s the type of league that we’re in now, a 3 and layup-type game,” Young said (via Johnson in a separate piece from Johnson). “No long twos and less on the post-ups and stuff like that because it slows down the game or it stagnates the offense.”

Young is taking 3.2 shots from three-point land this season, which is the most since the 2013-14 season (the first year of The Process and for Young, what could be considered a season of experimenting with new parts of his game).

“Yeah, I mean that’s not how I played pretty much my whole career. But like I said, its what’s being asked of me. I’m the type of guy my coach asks me to do something, if he asks me to run through a brick wall, I know it’s going to hurt but I’m going to try and run through that brick wall,” Young said.