The XFL’s popularity is surpassing even the most optimistic league projections. Vince McMahon, who owns all eight teams, is giving fans football during a time where they typically have a void. The game is close but isn’t exactly a spitting image of the NFL, given it has several rules changes. Yet, it’s a good product on the field and the league is giving fans a unique window into it via the media access it allows. 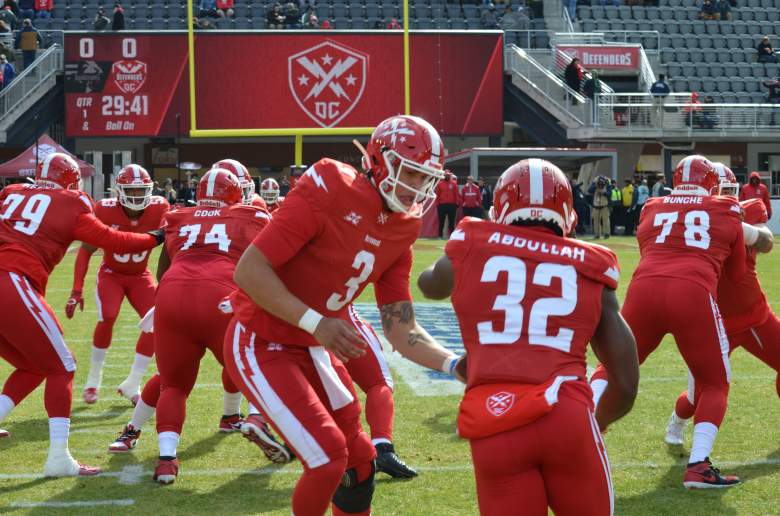 The access they allow is unlike most other sports. With teams warming up pregame, reporters face little restrictions on where they can go. You can nearly be in the huddle.

“It’s crazy, the media is everywhere,” running back Jhurell Pressley told Heavy.com. Pressley, who went undrafted out of New Mexico in 2016, has spent time with five NFL clubs (mostly preseason games and practice squads) in addition to carrying a heavy load for the Arizona Hotshots of the now-defunct AAF league.

“The media isn’t like this anywhere else. Not college, not the pros,” the 27-year-old said.

At one point during the pre-game walkthrough, I was standing at the 50-yard line with wide receiver Eli Rogers, thinking that he was away from the play. I introduce myself to the wide receiver, we shake hands, and he happily answers some questions. A moment later, he politely says “hold on for one second,” and I look up the field. Twenty players are running toward us, the ball was high in the sky and I quickly jog to the left.

The whole team was practicing their punt return package and Rogers was casually entertaining a reporter’s questions pre-snap. It was unbelievable.

Rogers, who played for the Steelers for several seasons, told Heavy.com that the access most media members get in the NFL on game days isn’t anything like what’s available in the XFL. But he didn’t have to explain much further to make his point. It was evident in where the boundaries were and weren’t.

The XFL has Unique Coverage Opportunities

Watching an XFL game on TV, you’ll see some abnormalities in the coverage. Kickers fielding questions after missed kicks; Quarterbacks explaining interceptions to sideline reporters; video of players interacting with fans, drinking beers with them after games.

During the game, media is allowed around the parts of the field, though the benches are off-limits for most outlets, as ESPN and the TV networks have exclusive rights to those areas. Still, there’s plenty of work to be done, as you are close to the action and there are always stories around it.

Yo @diannaESPN asked this dude on the sideline if he was pro or anti reclining his airplane seat and he gave a great answer. #ThisLeague pic.twitter.com/5EhD8ezvqj

Standing on the sideline, a fan approached me from behind and struck up a conversation with me. He asked what I did, I explained, and he calls over a woman to come meet him in the front row where he was.

“It’s the day after Valentine’s Day, you know this is the side piece,” he said while introducing me to the woman. “We’ve been together for 12 years,” she said while laughing. The journalist in me wanted to ask “as a side piece?” but I decided to keep the hard-hitting questions in my pocket. They asked for a picture and then handed me the camera to take one of them.

The DC Defenders have ushered in over 32,000 fans during the team’s first two home games and in the stands, it was a college-like atmosphere. Near the end of the contest, no one at Audi Field was unaware of the beer cup snake that fans had been amassing. 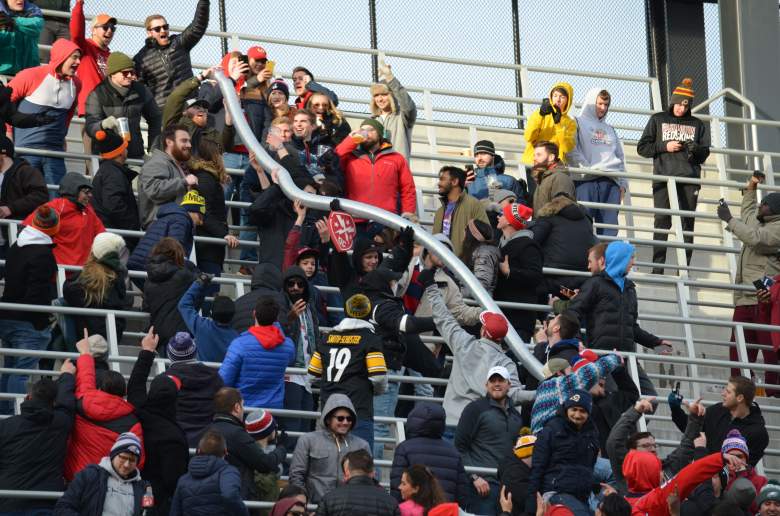 After the Defenders win, former Tampa Bay Buccanneers and Temple University left tackle Cole Boozer shotgunned a beer with fans before signing autographs for those who stuck around. Other players also took photos with the fans who made their way to the front of their sections, though most players waited a bit to have a drink.

Most media members weren’t allowed in the locker room after the contest, though that was understandable given what was going on in there (though I’m sure it’s a different story on the losing side).

A shutout by the defense deserves a shotgunning party afterwards ??

READ NEXT: Miami Heat Likely to Trade for Joel Embiid, per Oddsmakers

Read More
Football, Media, XFL
What's it like to cover an XFL game? We give you an exclusive look behind the scenes on a day of football.