The Falcons are set to release Desmond Trufant and the Seahawks make sense as a potential landing spot for the hometown cornerback. Atlanta has one of the largest NFL payrolls and releasing Trufant allows the Falcons to trim spending.

Trufant is originally from Tacoma, Washington and was a standout college football player for the Washington Huskies. The News’ Tribune’s Gregg Bell believes the Seahawks could have a real interest in signing Trufant to bolster their secondary.

Trufant is coming off a career-high four interceptions in 2019 prior to sustaining a season-ending forearm injury allowing him to play in only nine games. The former Falcons cornerback made the Pro Bowl in 2015 but has had up-and-down performance in coverage since his breakout season. Pro Football Focus gave Trufant a 70.3 player grade last season.

The cornerback had a $9.5 million salary with the Falcons last season, per Spotrac. It will be interesting to see what Trufant is able to command on the open market, but it appears unlikely that he will find a similar deal. Trufant could look at signing a short-term deal given his value is in flux since his season was cut short in 2019.

Seattle needs to bolster their secondary and build around Pro Bowl corner Shaquill Griffin. Tre Flowers struggled last season on the other side of the field. The Seahawks’ need became even more glaring after the Cardinals traded for star receiver DeAndre Hopkins. The NFC West was already one of the top divisions in the NFL, and looks to be even more challenging next season with the Cardinals’ offense expected to take a step forward.

Trufant is one of several cap casualties that adds to an already intriguing free-agent market. During his NFL Combine press conference, Seahawks GM John Schneider specifically mentioned targeting players who are released as an area of opportunity for Seattle this offseason.

“It’s every position,” Schneider said, per Seahawks.com. “That’s why we’re down here this week trying to figure out what the landscape is going to look like for the whole spring. The three or four phases of free agency, the draft, the trades, cap casualty guys, what have you. It doesn’t stop. Obviously defensively, we were 26th, I think. We need to improve our pass rush, we need to try to get the coaches as many players as we possibly can on both sides of the ball, but obviously defensively we were ranked a little bit lower than we were on offense.”

The Seahawks have been vocal about their desire to improve their pass rush, but it is not the only area of concern on the defense. Improving the secondary coverage is also likely to boost the Seahawks’ sack numbers in 2020. 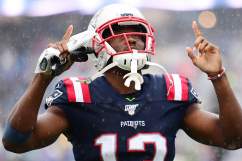