The Seattle Seahawks are looking to get Russell Wilson some more weapons in NFL free agency. The Seahawks are one of the teams who has contacted Patriots wide receiver Phillip Dorsett, per ESPN’s Josina Anderson.

“Just got off the phone with impending FA WR Phillip Dorsett. He told me, teams showing preliminary interest in him include the #NYJ, #SEA, #LAC, #SF, #LVR. He said, ‘I just want to come in and have a great opportunity to play and showcase how I can really flourish as a player,'” Anderson reported on Twitter.

Dorsett Is a Potential Option as the Seahawks Third Wide Receiver

Dorsett would be a plug-and-play option as the Seahawks’ third wide receiver next to D.K. Metcalf and Tyler Lockett. It would not be a surprising move as the Seahawks showed last season they are looking to add depth at the position. The Seahawks claimed Josh Gordon off waivers, but the receiver is now suspended indefinitely by the NFL. Seattle was also linked to Antonio Brown prior to claiming Gordon, but the team opted not to bring in the former Pro Bowl receiver.

Dorsett posted a career-high five touchdowns last season with the Patriots to go with 29 receptions for 397 yards. He is far from a superstar receiver but would be a solid option for the Seahawks to use in the slot. If the Seahawks signed Dorsett, it would likely be to a reasonable contract that would not impact their ability to bring back Jadeveon Clowney.

Wilson made it clear earlier this offseason that he wants the Seahawks to be active in free agency. The Seahawks quarterback noted during the Pro Bowl that he wanted the team to add “superstars.” Dorsett would not fit that bill, but we are just at the beginning of free agency. Much of the Seahawks’ offseason plans depend on what happens with Clowney.

“I think we need a couple more [players],” Wilson told ESPN during Pro Bowl week. “I think we need a couple more. Jadeveon is a big-time guy that we would love to get back on our football team. He was so good in the locker room. He brought so many, just havoc plays to the field. Hopefully, we can get a few other players there on the defense. Then also on offense, we have a great offense, but I think we can always add more pieces. I think that’s going to be the part that’s going to be great with John Schneider and Pete [Carroll], as well, in terms of this offseason’s free agency. Free agency is very, very key to getting those superstars on your team and try to get great players that can fill the space.”

The Seahawks are expected to be active in free agency in the days ahead. How active the Seahawks are with some of the available stars likely depends on whether they are able to agree to terms with Clowney. 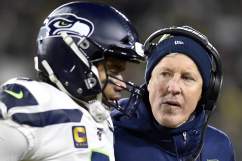