Getty Jadeveon Clowney's future is the biggest topic of the Seahawks' offseason.

As the Jadeveon Clowney watch closes in on the one-week mark, the Seattle Seahawks may have received a bit of positive news. So far, there has not been an agreement reached, but Sports Illustrated’s Corbin Smith described the Seahawks as in the “driver’s seat” to re-sign Clowney.

“As I reported a few hours ago… nothing new to report on Clowney. There have been discussions, but a deal hasn’t been struck. Sounds like a couple teams are still in the mix with Seahawks being in driver seat,” Smith reported on Twitter.

Clowney remains quiet about his free-agent future, but there is plenty of speculation about where the pass rusher will play next season. Pick6.com reported that the Seahawks offer was closer to $13 million rather than $18.5 million.

“A source close to the situation tells me the #Seahawks offer to Jadeveon Clowney was in fact for $13 Million, not the $18.5 Million reported earlier. Teams offering right around $13-14 Mill,” Pick 6 tweeted.

Sports Illustrated’s Corbin Smith initially refuted this report noting that such an offer would have likely ended negotiations between Clowney and the Seahawks.

“If they low-balled him that bad, I don’t think he would have kept negotiating with them…Could I see less money on a one-year deal but fully guaranteed than what was offered on a multi year deal? Sure. But $13 million?” Smith explained on Twitter.

It now appears there could be truth in both figures. The lower $13.5 million number is likely tied to a one-year offer from the Seahawks. ESPN 710 Seattle’s Jake Heaps’ took to Twitter to back the Pick 6 report.

“Talking with @thepick6com and verifying their source I can confirm this tweet. Not surprised to see the #Seahawks starting offer in 13-14M range on a 1-2 year deal. @JohnClaytonNFL and I on @710ESPNSeattle over the week have the belief the deal will end up being 15-16M range,” Heaps said on Twitter.

The Seahawks’ Offer Is Reportedly in the $18 Million Range Annually

I occasionally have a hard time evaluating Jadeveon Clowney, because sometimes it's like watching an alien play an entirely different sport. pic.twitter.com/wxpKnS1kbX

Pro Football Talk initially reported that the Seahawks were nearing a deal with Clowney, but later added that it appeared to be posturing by the pass-rusher’s representatives to increase demand. Time will tell if the report of the Seahawks’ low-ball offer are accurate, but there are several other indications that the Seahawks are willing to pay Clowney a higher annual salary in a long-term deal. The News Tribune’s Gregg Bell reported that the Seahawks’ offer is believed to be in the $18 million range annually. Houston Chronicle’s Aaron Wilson explained that Clowney has not received the deal he had hoped.

“Aaron mentioned that if he gets $15-$16 million + incentives that could push it to $18M-$20, he calls that an “accomplishment” for Clowney. Wow. Aaron says JD loves Seattle and he thinks Seattle would win a tie if he received similar deals,” Puckett tweeted.

The Seahawks appear willing to offer Clowney more money annually if he agrees to a long-term deal, but not as much on a one-year contract.

“A one year deal doesn’t give Seattle the ability to back load cap hit to later years on the deal and have a lower cap hit in 2020. It just would be more expensive from cap standpoint, which is why they’re reportedly offering less,” Smith explained on Twitter.

Clowney Following Titans Players on Instagram Has Some Fans Worried

Clowney appeared to begin following Titans players and media members on Instagram which has created quite a stir on social media. The good news for Seahawks’ fans is that social media follows are non-binding, but the Titans are reportedly one of three teams Clowney is considering. Bell reported that the Titans and Jets are the two other teams, aside from the Seahawks, that are pursuing Clowney. The pass rusher indicated at the end of last season that he wants to play for a contender, and it would appear that the Titans would be the biggest threat to the Seahawks.

Bell noted that the longer Clowney goes on without signing with a team, the better chance the Seahawks have of re-signing the defensive end. As long as Clowney remains unsigned, some Seahawks fans are going to doubt that the pass rusher is returning to the Pacific Northwest.

“Jadeveon Clowney left weighing 1-year deals further increases chance he returns to #Seahawks. Prove to the market his worth for 2021 free agency when cap spikes, while playing for the team he’s comfortable/most familiar. Of course, SEA would want him for longer—at its price,” Bell noted on Twitter. 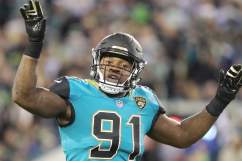