Getty The Seahawks remained in discussions with Jadeveon Clowney until he signed with the Titans.

NFL free agency is upon us which means the Seahawks have a big decision to make with Jadeveon Clowney. Thanks to a series of franchise tags around the league, Clowney is arguably the top available free agent. NBC Sports’ Peter King predicts that the Seahawks are likely to let Clowney walk unless they are able to bring the defensive end back on a bargain contract.

Seattle will wait for the price to go down on Jadeveon Clowney, and if it does, the Seahawks very much want him. But I’d be surprised if they paid him premier pass-rush money. Another team with some cash (Giants? Jets?) might.

Sports Illustrated’s Albert Breer is more optimistic about the Seahawks’ chances of re-signing Clowney. Breer expects the Seahawks to go “pretty far” in their efforts to retain Clowney and Jarran Reed.

And while Clowney has durability questions and Reed isn’t coming off his best year (and served a suspension during it), both will likely command big paydays, testing how far Seattle’s willing to go to keep them. Based on how they value pass-rushers? I’d bet they’ll go pretty far.

The Seahawks Are “Making Attempts” to Keep Both Clowney & Reed

On the eve of NFL free agency, ESPN’s Jeremy Fowler provided an update on the Seahawks’ mindset for Clowney and Reed. Fowler noted that both players could test free agency, but the Seahawks are “making attempts” to keep both key pieces of their defensive line.

The Seahawks Plan to Assess the Market for Clowney

Seahawks fans may need to prepare for a long process to find out Clowney’s future. Leading up to the start of free agency, there were numerous reports about Clowney wanting to “set the market,” but with the cap number being smaller than expected there may be even fewer teams willing to pay top dollar for the pass rusher.

No one doubts Clowney’s talent but the defensive end has battled with injuries in recent years. Seahawks GM John Schneider explained at the NFL Combine that the team expects to assess the free-agent market for Clowney.

“It’s a landscape thing,” Schneider noted, per Seahawks.com. “Trying to figure out—at this point last year, I thought Frank was going to be on our team. It’s really a daily or weekly process of figuring out how you’re going to put this thing together. We have some cap flexibility this year, which is great, but it’s not just about this year. It’s planning for next year and the following year as well. We have to be cognizant of where we’re going.”

Some are skeptical of giving Clowney a big-time deal given he only notched three sacks last season. Schneider admitted that there is more to Clowney’s value than just his sack numbers.

“It doesn’t, because he’s so disruptive,” Schneider said, per Seahawks.com. “When he comes off the ball and is using his hands—he’s an incredible player, no doubt about it. Sack number wise, I think he had 8.5 a couple of years ago. He’s the exact same player that he was in Houston.” 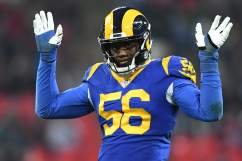