As the Jadeveon Clowney saga continues, the Seahawks received some good news on potential free-agent target Everson Griffen. The former Vikings defensive end announced he will not be returning to Minnesota next season and will hit the free-agent market.

“While it is with a heavy heart that I say goodbye, I leave Minnesota in the best physical and mental shape I have ever been and have many Pro Bowl seasons to come!” Griffen noted on Instagram. “Wherever my next stop is, I will always be grateful to and cheering for the Vikings. Thank you all for the love, support and memories.”

St. Paul Pioneer Press’ Chris Tomasson reported that Griffen is likely awaiting the outcome of Clowney’s negotiations before signing with a new team.

“Source said dominoes will need to fall before Griffen ends up with a new team. A lot will depend on where Clowney signs and then Griffen could end up being an option B for a team that doesn’t get Clowney,” Tomasson reported on Twitter.

Many people have connected Griffen with the Seahawks for two key reasons. The Seahawks are looking to upgrade their pass rush and Griffen already has a relationship with Pete Carroll from his college days at USC.

Sports Illustrated’s Corbin Smith reported that Griffen is the Seahawks “primary fallback option” if the team is unable to re-sign Clowney.

Per sources, Seattle currently views former Minnesota Pro Bowler Everson Griffen as the team’s primary fallback option if Clowney refuses to lower his financial demands. The 32-year old defensive end opted out of the final three years of his contract in February and is “exploring” the market.

Outside of the USC connection, Griffen fits a major area of weakness for the Seahawks: getting to the quarterback. The four-time Pro Bowl pass rusher posted eight sacks last season. Griffen has been open about his own mental health battles but bounced back on the field after a down 2018.

The Seahawks could still look to sign Griffen even if Clowney returns to Seattle. Smith noted that the Seahawks would likely need to make additional cuts to have the cap room to sign both players.

“Even if Clowney re-signs, the Seahawks may remain in the mix for Griffen, though several moves would need to be made to open up necessary cap space to sign both players,” Smith explained on Sports Illustrated.

As The News Tribune’s Gregg Bell detailed, the Seahawks may not be able to continue waiting for Clowney to make a move with Griffen.

Because Griffen is likely to attract multiple offers now that he’s departed Minnesota’s plans, the Seahawks may not be able to wait for Clowney to choose before acting on Griffen. Seattle may need to clear space beyond the $18.3 million they had available as of Friday to sign either edge rusher—or, to upgrade the pass rush as it needs, both. 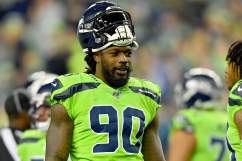