Getty The Seattle Seahawks have been linked to pass rusher Yannick Ngakoue.

The Seattle Seahawks are the latest team to be linked to Jacksonville Jaguars’ pass rusher Yannick Ngakoue. Pro Football Network’s Tony Pauline reported that the Seahawks have had discussions with the Jaguars about a potential trade for Ngakoue which would likely require at least a second-round pick.

I’ve been told by a very good source that the Seahawks would like to acquire Yannick Ngakoue via trade. My sources tell me they believe compensation would include something like a second-round selection and possibly a situation where the Seahawks swap their pick in round one for the Jags pick in the second round.

Based on Pauline’s report, the Seahawks would send the No. 27 and either the No. 59 and No. 64 pick to Jacksonville for Ngakoue along with the Jaguars’ No. 42 pick. It will be interesting to see how serious these trade talks become as free agency begins.

ESPN’s Adam Schefter reported that the Jaguars will franchise tag Ngakoue which would prevent the pass rusher from hitting the open market in free agency. The tag would keep Ngakoue under contract for an additional season and allow the Jaguars to trade him to another team.

“Jacksonville Jaguars will use their franchise tag on pass-rusher Yannick Ngakoue, per league sources. The tag will allow them to try to trade him if that’s what they decide or are forced to do,” Schefter tweeted.

If the Seahawks acquired Ngakoue, the franchise tag would be around $19.3 million, per Schefter. This would eat into the Seahawks’ available cap space, but could be a backup option if the team is unwilling to meet Jadeveon Clowney’s asking price in free agency.

The Jaguars are aware I no longer have interest in signing a long term contract in Jacksonville. Duval, I love you and gave you guys everything I got. I’m thankful for the journey and look forward to continuing my career elsewhere. -91

The rumors started to intensify after Ngakoue essentially tweeted a goodbye note to Jaguars fans. The pass rusher noted that he “no longer have interest” in signing a long-term deal with the Jaguars.

“The Jaguars are aware I no longer have interest in signing a long term contract in Jacksonville. Duval, I love you and gave you guys everything I got. I’m thankful for the journey and look forward to continuing my career elsewhere. -91,” Ngakoue noted on Twitter.

CHAOS CLOWNEY! Last night @clownejd had the single most DOMINANT defensive lineman performance I’ve seen all year. How do you complete a pass with this chaos all around you? Rivals anything Von Miller or JJ Watt have ever done in a game. @seahawks #baldysbreakdowns pic.twitter.com/w0GLfyUJhZ

It appears a bit unrealistic to think the Seahawks would trade for Ngakoue and also re-sign Clowney. It would likely tie up about $40 million of cap space on two players, but the Seahawks have emphasized they want to improve their pass rush. What is more realistic is the Seahawks are exploring acquiring Ngakoue as an alternative for Clowney. The only exception would be if the Seahawks were able to reach a long-term deal with Ngakoue as part of the trade.

Ngakoue has had a very productive career and is two years younger than Clowney. The Jaguars defensive end has also only missed one game over his four-year career when compared to Clowney who has battled several injuries in recent years. Ngakoue has had at least eight sacks in all four of his NFL seasons.

Ngakoue had eight sacks and 41 tackles last season for the Jaguars. His best statistical season came in 2017 when Ngakoue notched 12 sacks and 30 tackles.

It will be worth watching how the Seahawks move in the next few weeks when it comes to addressing the pass rush. Trading for Ngakoue puts the Seahawks in the exact same position they are in with Clowney next offseason when the pass rusher would hit the open market. 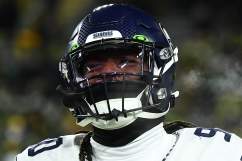