Getty Chicago Bears general manager Ryan Pace could trade down in the draft this year.

It’s no secret that the Chicago Bears have minimal draft capital. Ever since general manager Ryan Pace traded the team’s 2019 and 2020 first-round draft picks to the Raiders for All-Pro linebacker Khalil Mack, the team has been a bit strapped come draft time. The addition of Mack has unquestionably given the Bears’ defense a huge boost, but the trade with the Raiders could still have major ramifications for this current Bears team.

Part of the trade for Mack included the Raiders sending a 2020 second rounder to Chicago. While the Bears have no first-round picks this year, they do have two second round selections: the No. 43 and No. 50 overall picks. The 43rd pick came from the Raiders via the Mack trade, and experts can’t seem to agree on what the Bears will choose to do with it. Mel Kiper Jr. thinks Chicago will select Notre Dame tight end Cole Kmet, but others think the Bears will use their first pick to bolster a weak offensive line.

Yet another analyst, Brad Biggs of the Chicago Tribune, also pegged the Bears to nab an offensive lineman in the second round — but Biggs’ expectations and predictions for what the Bears are going to do with one of both of their second rounders adds a layer of intrigue to the team’s 2020 NFL draft.

Brad Biggs on Bears’ Draft: Expect Chicago to ‘Trade Down’ 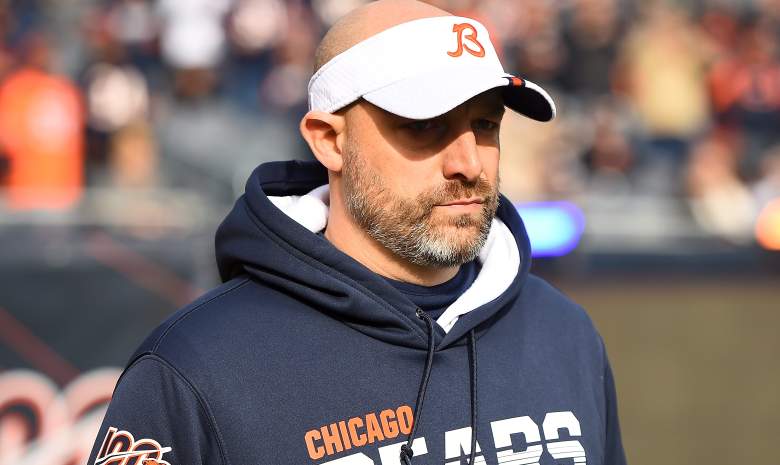 GettyHead coach Matt Nagy of the Chicago Bears is in need of play makers on offense, as well as linemen to block form them. (Photo by Stacy Revere/Getty Images)

In his latest mock draft for the Tribune, Biggs has the Bears taking Michigan center/guard Cesar Ruiz with the 43rd overall pick. “The Bears could plug him in immediately at right guard to give them a young building block for the future. His addition would allow them to slide Germaine Ifedi, projected to compete at right guard, into a swing tackle role,” Biggs surmised. This would be an interesting way for the Bears to add depth to their offensive line while also giving multiple players chances to shine at different positions.

When predicting the Bears’ 50th selection, Biggs began with a very sure-sounding statement: that he expects Chicago to trade down with one — or perhaps even both — of its two second-round picks in the upcoming draft.

“The Bears are expected to seek a trade down with at least one of their second-round picks to add depth to their class,” Biggs wrote. He chose TCU cornerback Jeff Gladney as the team’s mock selection at 50, but his note about Chicago trading down is worth keeping an eye on.

What Trading Down Could Mean for the Bears

Should Ryan Pace decide to send one or both of the team’s second-round picks to another team in exchange for more picks in the later rounds, he could be looking to teams he has dealt with before. The Athletic’s Adam Jahns broke down Ryan Pace’s trade history, and according to Jahns:

“Of the 18 trades that Pace has executed, four of them have been made with the Patriots. The Rams and Eagles are next with two each. It’s notable because familiarity helps with deals. Pace said so himself after executing the deal last year in the third round for [David] Montgomery. If the Bears want to use their second-round picks to move around this year, history says that the Patriots and Rams will be willing to talk. The Bears know that. Since 2015, the Patriots lead all teams with 10 trades that have involved second-round picks. The Rams are right behind them with nine. The Bears have five.”

Jahns also notes that the Patriots, one of Pace’s favorite trading partners, currently have 12 total picks this year, but they have zero picks in the second round. Thus, Bill Belichick could be very amenable to getting one from the Bears for the right offer.

If the Bears manage to send one of their second rounders to another team, it’s hard to predict what they will get in return. They will surely finish the draft with more picks than they started with, and they could likely get solid third and fourth selections in exchange for one second round pick.

None of this is set in stone, however. GM Ryan Pace has been wildly unpredictable with his selections in previous drafts, and the 2020 virtual draft should be no different. Buckle up and enjoy the ride, Bears fans.