There was rarely a dull moment last offseason for the Cleveland Browns, who entered the year as a trendy Super Bowl pick propelled by a mountain of hype in the months leading up to kickoff.

But once the pads were on and the games counted, things couldn’t have gone worse for the Browns, who were served and extra scoop of harsh criticism as they stumbled to a 6-10 finish thanks to the countless magazine covers and statements made in the preseason.

Cleveland quarterback Baker Mayfield is usually one of the more brash personalities in the media and isn’t shy to say what’s on his mind. But entering his third season, Mayfield is changing his approach.

It’s put up or shut up time for the former No. 1 overall pick.

Baker: “It’s time to work, do our thing — instead of talking about it."

“I have a different approach this year. I think everybody who has been interviewed on our team has hit the nail on the head over and over about this is time to work,” Mayfield said during a Zoom call with reporters on Wednesday. “It is time to do our thing, instead of talking about it. This is the first media thing I have done, just because there is no need to be talking about it. It is just time to go do it and right now, it is moving in silence, which is fine with me.

“That is how I used to do it before getting on a bigger stage, so I am happy to get back to those roots. Like I said earlier, get back to the fundamentals to where I can accomplish the goals when the season comes around.”

Baker Mayfield: "We brought in guys that want to win, and they will do anything to accomplish that"Quarterback Baker Mayfield addressed the media via Zoom on May 27, 2020. #PlayerSound2020-05-27T20:26:06Z

After garnering some MVP hype in the preseason following a record-setting rookie year, Mayfield finished his sophomore season in the NFL with 3,827 yards, 22 touchdowns and 21 interceptions, ranking next-to-last in both passer rating (78.8) and completion percentage (59.4%). It wasn’t what people expected when the Browns added Odell Beckham Jr. to the offense via a blockbuster trade.

Now Mayfield enters a critical year needing a bounce back. The Browns will be faced this coming offseason with the decision to pick up his fifth-year or not, similar to what the Bears dealt with with Mitch Trubisky this year.

Baker Mayfield: "Year 3 is a big year timing wise with these contracts. Everybody knows that."

“There’s no doubt Year 3 is always a big year in these contracts,” Mayfield said. “Timing-wise, everybody knows that. I’m not going to put any added pressure on myself. There’s no need for that, because if I win, good things will happen.

“That’s why quarterback is one of the positions that’s the hardest in sports—if I play better, our team is going to do better. I put that pressure on myself, so it doesn’t matter what year it is. I have to play better each year.” 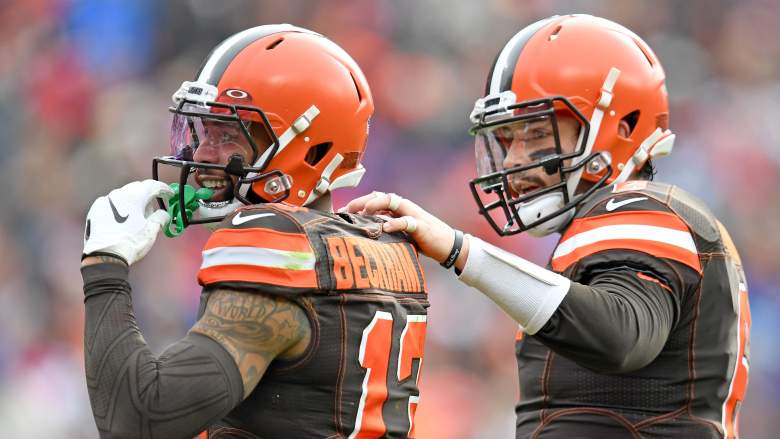 What will help Mayfield’s progression is having two healthy stars at wide receiver. Both Beckham and Landry had offseason surgeries and Mayfield is confident they will come on strong.

Landry has not missed a game in his career, earning a reputation as an iron man at the wide receiver position. On top of that, he was extremely productive despite being banged up last season, collecting a career-high 1174 yards last season and six touchdowns.

Despite breaking the 1,000-yard barrier last season, Beckham did not live up to the wild expectations set for him. He finished his first season in Cleveland with 1,035 yards and four touchdowns.

“They’re working really hard to come back from their surgeries. I kind of enjoyed listening into some receiver meetings. It’s just a different mindset,” Mayfield said. “I’m looking forward to seeing the productivity they’ll give. (Last year) It definitely hindered them. The mental frustrations affected it more, not being able to do what they normally do. They’re taking advantage of their time this offseason.”