It didn’t take long for Nick Chubb to rumble his way into the top tier of NFL running backs, and much of his success can be attributed to a tireless and focused work ethic that is visible in everything the Cleveland Browns star does.

Chubb just missed out on the rushing title a season ago, but should be primed for another run at it thanks to his commitment to offseason work, despite COVID-19 concerns. Chubb showed off his massive explosiveness in a set of workout videos he shared this week, showing the work that allows him to both run over and run by defenders on the field.

Nick Chubb is putting in that work 👀💪

Chubb’s motivation is likely watching his first rushing title slip away. He came up just short of the ground crown, watching Titans RB Derrick Henry surge by him with a 211-yard performance in the season finale. Chubb totaled just 86 yards over the final two weeks — mostly due to inconsistent play-calling — finishing the year with 1,494 yards and eight touchdowns.

Chubb made it very clear during a rare interview on the Jim Rome Show that he believes the key to success is putting in the necessary work, which didn’t happen last year as the Browns stumbled to a 6-10 record after a hype-filled offseason.

“I said it before, I think we thought we were a lot better than we were. We thought it was going to just happen for us, we didn’t actually put the work in. We got this guy, and this guy, you know we’re straight, so we don’t need to actually work, it’s going to happen for us.

“Hard work beats talent when talent doesn’t work. I think that’s exactly what it was with us.” 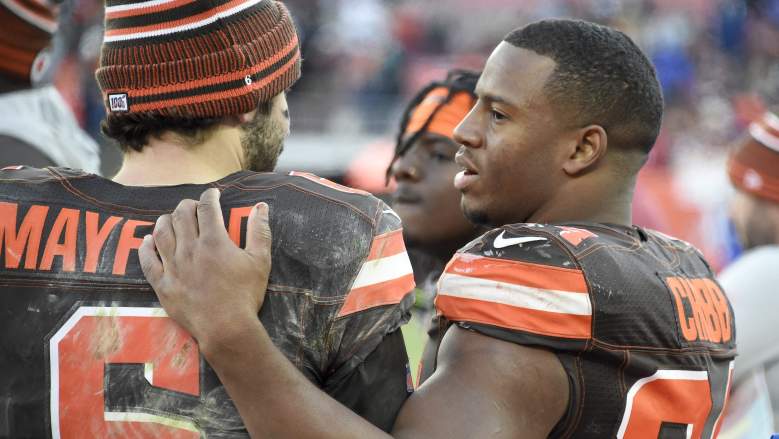 Chubb has not only emerged as a great talent, but also as a leader in the locker room for the Browns. The former second-round pick has quickly found the good side of new head coach Kevin Stefanski, who was not shy to shower Chubb with praise.

Stefanski isn’t the only one heaping praise on Chubb. His offensive lineman also have delivered glowing reviews.

“I think Nick’s built for any offense. He’s a great player, and talk about a guy that works,” Browns Pro Bowl guard Joel Bitonio said on 92.3 The Fan. “He works his butt off all the time and he’s a pleasure to block for. I’m excited for him. I think he’s going to love this system.”

#Browns Joel Bitonio on @923TheFan on Nick Chubb: “I think Nick’s built for any offense. He’s a great player, and talk about a guy that works. He works his butt off all the time and he’s a pleasure to block for. I’m excited for him. I think he’s going to love this system.”

New Browns tackle Jack Conklin helped blow open holes for Henry in Tennessee last season, but has had no shortage of good things to say about his new running back, Chubb.