When Joe Judge was hired as the head coach of the New York Giants in early January, the first question that was on everyone’s mind was, who?

Fast forward through a few months that include a fiery, well-received introductory press-conference and a highly-regarded draft haul, and Giants faithful have come around to the thought of Judge heading their franchise.

However, despite the influx of hope Judge has added to the Giants’ future, Las Vegas isn’t quite ready to hang their faith on the coat tail of the 1st-year head coach.

Judge Nearly Bottoms-Out in Coach of the Year Odds

Back in 2018, Chicago Bears head coach Matt Nagy was a first-year head coach who went on to surprise the league, leading his team to a 12-4 record and eventually staking claim to the AP NFL Coach of the Year award.

Let’s just say Vegas isn’t expecting the same success for Judge in his inaugural season as a head man in the league.

Accordingly to BetOnline, Judge has 40/1 odds to win the 2020 Coach of the Year Award, which ties him for the 2nd-worst odds of any coach entering the season. 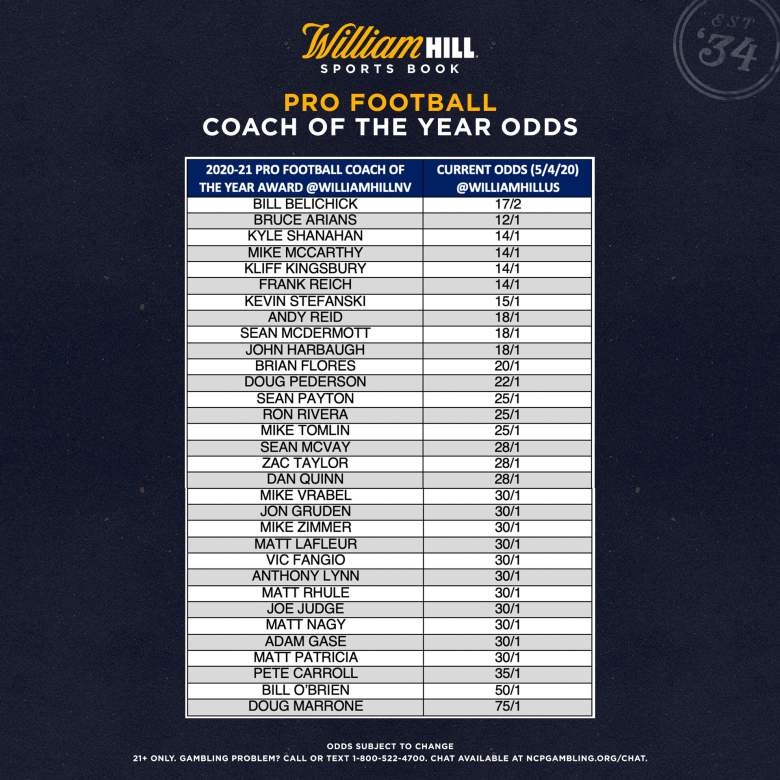 NFC East rival head coaches Mike McCarthy of the Dallas Cowboys and Philadelphia Eagles’ Doug Pederson both own odds within the top half of the league. McCarthy in particular appears to be a betting favorite, owning the 4th-highest odds per William Hill at 14/1.

No one is predicting a Super Bowl for Big Blue this season… Well, no one outside of New York, that is. However, if Judge can turn the Giants into week-in, week-out contenders in his first season at the helm, and potentially sneak into the playoffs, he’ll be given a fighter’s chance to nab the hardware.

Interestingly enough, Tampa Bay Buccaneers’ Bruce Arians is tied with Belichick for the top spot according to BetOnline, while owning the 2nd-best odds per William Hill. Of course, Arians is now the coach of Patriots all-time great Tom Brady, after the future Hall of Famer decided to jump ship from New England to Tampa Bay this offseason.

Baltimore Ravens head coach John Harbaugh won the award last year following a 14-2 record. The season proved to be a 4-game win increase from the year prior and the best record in all of football for the 2019 season.