Getty Nick Foles won a Super Bowl with the Eagles in an offense very similar to Matt Nagy's.

New Chicago Bears quarterback Nick Foles is a dad again. Foles’ wife Tori gave birth to a son, Duke Nathan Foles, on June 12, and shared the news via Instagram late Wednesday evening. The two also have a daughter, Lily, who was born in June 2017.

“What a true miracle and sweet surprise it is to meet our baby BOY,” Tori Foles captioned, along with several photos she shared of Duke. “Lily has a new best friend and loves her baby bro so much. We feel incredibly blessed and are enjoying every second with our little man.”

Duke Nathan Foles 💙 6/12/20 at 4:08 pm 9 lbs, 21.75 inches long What a true miracle and sweet surprise it is to meet our baby BOY! Lily has a new best friend and loves her baby bro so much. We feel incredibly blessed and are enjoying every second with our little man 💙🌈 #dukenathanfoles

Tori also shared a side-by-side image of baby Duke and her husband as an infant, noting the similarities between the two are pretty incredible. In the baby photo of Foles shared by his wife, he is clutching a football with his tiny hands. 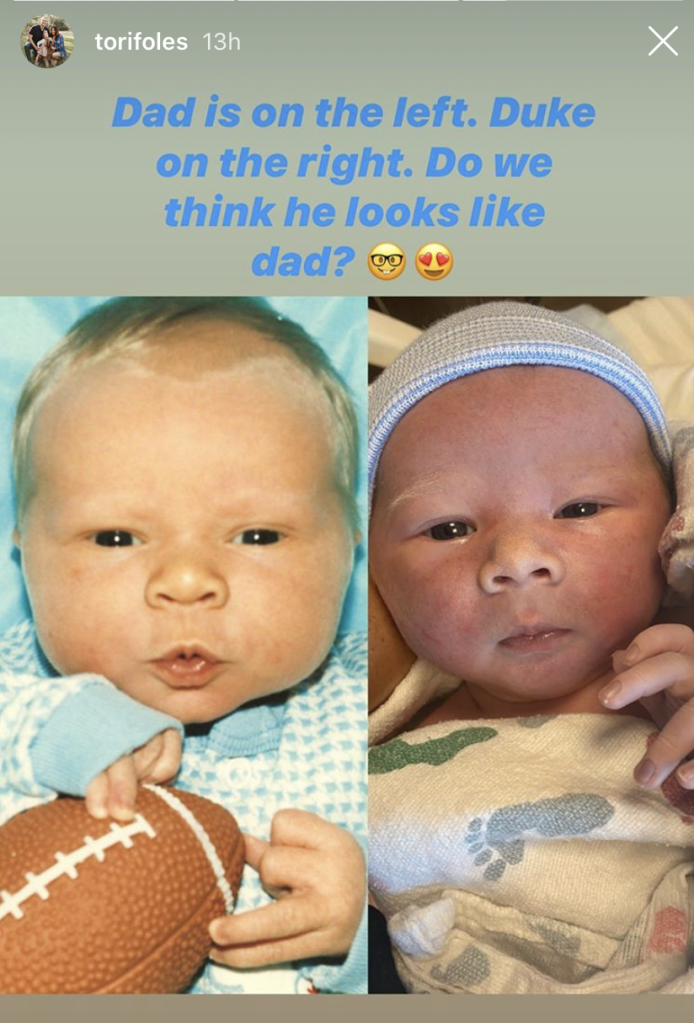 InstagramNick Foles and his baby boy Duke. Foles is the one clutching the football.

Bears QB Nick Foles: My Children Are ‘What it’s About’ 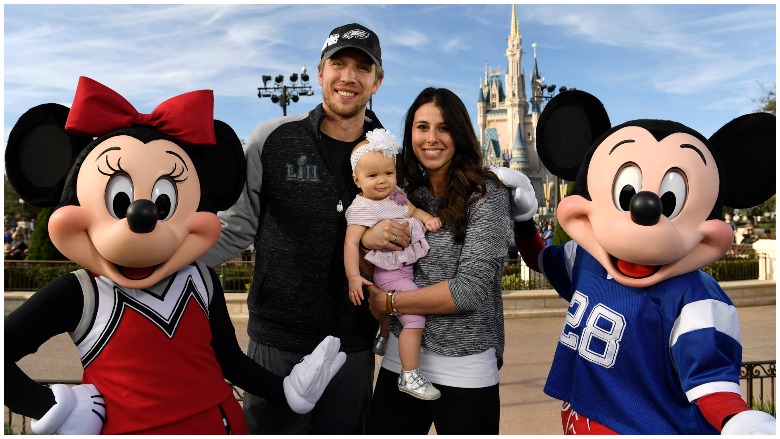 When Foles won the Super Bowl with the Philadelphia Eagles back in 2018, one of the more memorable images to emerge from the celebration was a photo of little Lily Foles in oversized pink headphones staring at her beaming father. When asked about his family leading up to the big game, Foles got visibly emotional.

“That’s the most important thing,” Foles said about his daughter. “When I think about this journey and everything, I get home and I, uh … I get to see her. I get to see my wife. I see her and my wife, just in her face and in her mannerisms, that’s what it’s about. I know that every time I step on the field, every single thing I do, there’s going to be some days she looks and wants to know who her daddy was and what he did.”

Nick and Tori suffered a miscarriage in May of 2019 when he was with the Jacksonville Jaguars, and Tori shared the devastating news on Instagram.

Read below for full story. So thankful for this family right here and miss having them right down the street! Our weekend together was not quite as planned, but blessed by their presence and the help they provided us with an unexpected set of circumstances that nick and I suddenly found ourselves in. As several of you knew, we were about 15 weeks pregnant with our 2nd baby. Early Sunday morning after a rough couple days fighting a “virus” of some sort, I went into sudden labor and knew something was wrong. Not long after we learned we had miscarried our baby boy. To fully labor and deliver and even see our baby boy was a pretty devastating process. Come to find that I had contracted an infection of pneumonia in the blood. The emotions go back and forth from immense and overwhelming sadness, confusion and anger to a firm belief that God has this fully in his hands and will use this for good. We cannot always understand or explain, but we know that is true. We’ve endured some unique challenges as a couple so far, but never quite knew what something like this felt like and now we do. We have so much compassion and sensitivity to those who have gone through a miscarriage at any point and in any circumstance. We know they all happen very differently. We are finally home from the hospital and recovering physically from the infection with antibiotics (already much better) as well as emotionally from this traumatic loss. This will take time. So many thanks to everyone who has reached out to us and who has been praying for us. Also a heartfelt thank you to Baptist Beaches hospital staff in maternity. What an incredible team of doctors and nurses that took care of us the last 4 days. ❤️ Thank you Taylor family for being here this weekend. We had a pretty fun weekend planned, and it was turned upside down, but God knew we needed you. ❤️

After such a sad and terrible loss, the Foles’ now have their second healthy child, and their first son.