Getty Wide receiver and kickoff returner Cordarrelle Patterson could be a surprise release.

Could All-Pro kickoff returner Cordarrelle Patterson be cut by the Bears prior to the 2020 NFL season? If the NFL owners who are currently asking the league to lower the salary cap next year get their way, that could very well happen. There’s always a chance the Bears keep Patterson, but they stand to save a good deal of cash if they release him.

Per NFL insider Tom Pelissero, if the cap does get lowered, the NFLPA and several GMs believe it would “lead to a rash of veteran cuts and restructures before this season.”

Negotiations are fluid, but NFL owners continue to push for an agreement to lower the salary cap in 2020 and 2021 — proposals the NFLPA and GMs believe could lead to a rash of veteran cuts and restructures before this season, sources say.

Pro Football Focus’ Brad Spielberger, who has been paying specific attention to the Bears’ salary cap for a while now, retweeted Pelissero with a list of names of potential players who could be cut if this happens, and Patterson’s name was among the 25 players listed.

Bears Would Save $4.5 Million By Cutting Patterson 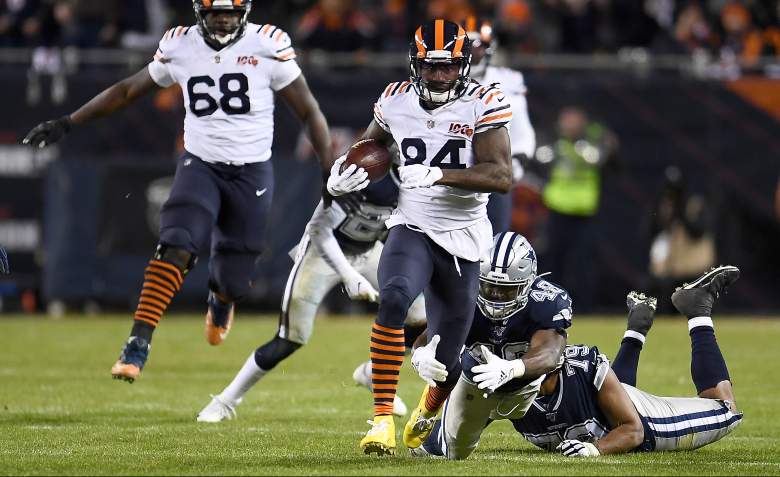 GettyCordarrelle Patterson of the Chicago Bears carries the ball against the defense of the Dallas Cowboys. (Photo by Stacy Revere/Getty Images)

Patterson signed a two-year $10 million deal with the Bears in 2019, and he instantly became their best special teams player and a potential offensive threat. His skill set is so versatile, there’s even been talk of converting him to a tight end or fullback, which is something he said he’d love to try. But how much Patterson figures into Nagy’s scheme will play a role in determining whether he stays or goes in 2020.

It also depends on how badly the Bears need $4.5 million dollars, which will likely be the ultimate factor in determining Patterson’s future with the organization. Cutting Patterson prior to the season would give Chicago a $500,000 dead cap hit, but with a savings of around $4.5 million, he could very well be out the door.

The Bears Would Miss His Play-Making Ability

If the team does decide to part ways with him, they’ll miss his presence immediately. Patterson was on both the first and second-team All-Pro squads last season — he made the first team as a returner and the second team as a defensive special teams standout. It seemed as though he made a play in every game last season.

Patterson also has a great deal of upside in an offense like Matt Nagy’s. His speed and play-making abilities were showcased on several of the team’s best runs and screens last year — and Patterson isn’t even a running back. He’s technically a wide receiver, and his size has always made him a matchup nightmare on certain situations, so don’t be surprised if he sticks around for the final year of his deal, either. The NFL is a wild and unpredictable place.

Cordarrelle Patterson reached a top speed of 22.23 mph on this run, the fastest speed reached by a ball carrier in two years 😱😱 @ceeflashpee84

The Bears released tight end Ben Braunecker yesterday in order to free up a little under $1.5 million in cap space, which gives them a bit more wiggle room fiscally. Whether they want to free up even more space remains to be seen, but if they do, look for Patterson to top the list of unfortunate casualties.

Read More
Chicago Bears, Football, NFL
Could this standout play-maker be a salary cap casualty for the Chicago Bears?