Getty Packers QB Aaron Rodgers is Enemy No. 1 in Chicago.

Trevis Gipson gets it. The Bears’ fifth-round draft pick out of Tulsa hasn’t been a member of the team long, but he knows who the enemy is. Chicago sent a 2021 fourth-round draft pick in order to snag him at No. 155 overall, and the outside linebacker is looking forward to joining what should be one of the best defenses in the league.

“I think it’s going to be exciting,” Gipson said in his Meet the Rookies segment about joining a defense full of All-Pros and talented veterans. “I’ve always been a fan of Khalil Mack, Robert Quinn also. Obviously, they have a lot of experience in the game. I want to play football as long as I can, and I think those two guys can really help guide me on that path.”

One thing he doesn’t need to learn is who Public Enemy No. 1 is — he already knows, and he shared his findings in hilarious fashion on Twitter. 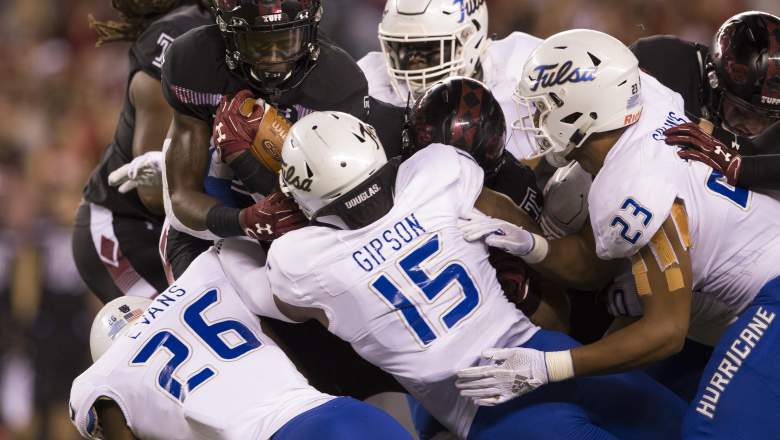 GettyTrevis Gipson was taken by the Chicago Bears in the fifth-round of the 2020 NFL Draft. He already has a good feel for the city and its fans.(Photo by Mitchell Leff/Getty Images)

Gipson, who has been fairly active on Twitter since the Bears drafted him, had refrained from making any observations about his upcoming competition until Sunday evening, when he shared something he has learned about the fans of his new team. “I realize more and more every tweet that bears nation REALLY hates Aaron Rodgers,” he tweeted, along with multiple laughing emojis.

Gipson also liked the following tweet, which prophesied a strip-sack on Rodgers in his future:

Rember that time when you sack Aaron Rodgers and pick up the ball and score a TD?

Gipson’s not wrong about the Rodgers hate. The Packers and Bears have the NFL’s longest and most storied rivalry, but Rodgers has pretty much owned Chicago in his tenure with the Pack. He is 19-5 against the Bears, and his stats against them are ridiculous: he has thrown for 5,806 yards and 47 scores, and has a 102.0 rating in that span. So yeah, a great many Bears fans find him to be a bit of a scourge.

Gipson Can Secure the Love of Bears Fans on the Field

In his two years as a starter at Tulsa, Gipson registered 12 sacks, 24 tackles-for-loss and seven forced fumbles. He has all the makings of an excellent young edge rusher who could serve as a role-player on defense at first before seeing that role expand eventually. He’ll be backing up Mack and Quinn this season, so he’ll certainly have some excellent players to learn from.

While Gipson’s Twitter game may charm some Bears fans, it will likely be his play that will ultimately win their hearts. If Gipson can become another Willie Young or Roy Robertson-Harris, he’ll also become a fan favorite — especially if he keeps his sights set on Rodgers and the Packers.