Getty Adrian Peterson has found a new home in the NFL.

The former Vikings running back appeared on NFL Network’s Good Morning Football and he was asked if breaking the league’s all-time career rushing record is something he would like to accomplish before the end of his career. Peterson, the No. 5 all-time rusher in NFL history, pivoted to a goal he came close to with the Vikings.

“That’s not really my ultimate goal, it’s one of my top goals. Winning a championship is the one that I’m chasing the most,” he said.

Peterson’s Career May Be Revitalized 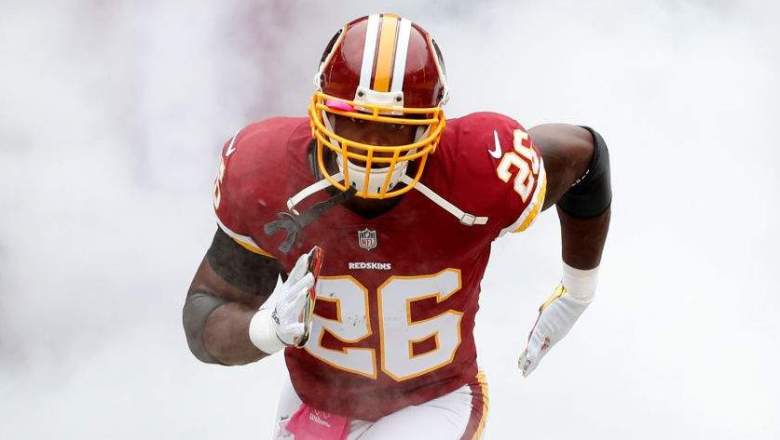 GettyPeterson is now the undisputed lead back in Washington.

While Peterson is still chasing the all-time rushing yards record, it was questionable whether he could surpass Detroit Lions legend Barry Sanders this season given the competition at running back on the Washington Football Team.

That was until 2017 second-round pick Derrius Guice was arrested on domestic assault charges and released from the team. Peterson has little competition for carries without Guice aside from second-year Heismann runner-up Bryce Love and could see as much work as the 35-year-old can handle under Ron Rivera, who favors a strong run game.

Peterson’s 14,216 career rushing yards rank fifth all-time. He trails Detroit Lions legend Barry Sanders’ 15,269 rushing yards and could surpass Sanders this season if he rushes for 1,054 yards at the age of 35.

The added opportunities could help Peterson extend his career if he puts on a show in the final year of his contract. Under the new CBA, players with seven or more years of experience are to be paid a minimum of $1.05 million. If Peterson proves his worth, he could see a contract extension or find another team via free agency.

He recently said he’d like to play four more years to the age of 40.

Drafting Adrian Peterson in 2007 helped spark excitement surrounding a Vikings franchise that was experiencing an early 2000s slump after making the postseason seven years in the 90s.

Here are a few of the Star Tribune’s picks of his best moments with the Vikings.

Oct. 14, 2007, at Chicago: As a rookie, Adrian Peterson had a couple of 100-yard games at home, but his statement to the league came during his first trip to Soldier Field. He churned out 361 all-purpose yards, including 224 rushing (with three touchdowns), 128 on kickoff returns and 9 receiving. The Vikings staved off the Bears’ comeback when Peterson’s 53-yard return set up a winning field goal in the closing seconds.

At the age of 34, how will he fare tonight on #MNF as a member of the @Redskins? #HTTR#CHIvsWAS: TONIGHT at 8:15pm ET on ESPN pic.twitter.com/TwlalrgQjm

Nov. 4, 2007, vs. San Diego: Peterson’s fourth home game was one for the record books. In what could be viewed as an early change of the guard with Chargers legendary running back LaDainian Tomlinson, Peterson outran him for the single-game NFL rushing record in his eighth career start. Peterson’s 296 rushing yards at the Metrodome still has not been topped. He also chipped with in three rushing touchdowns in the victory.

Adrian Peterson breaks single game rushing record with 296yards and 3TDs as a rookie vs the Chargers (2007) pic.twitter.com/TYAq29Sa19

Sept. 13, 2009, at Cleveland: While the Vikings’ magical 2009 season with Brett Favre was not Peterson’s statistical best, he set the tone for their 12-4 year with a dominating season opener at Cleveland. Perhaps no highlight better summarizes Peterson’s Hall of Fame career than the 64-yard touchdown run, in which he ran through one Browns defender, planted a palm on the helmet of another and burst down the sideline to seal the win. He finished with 180 rushing yards and three touchdowns.

Adrian Peterson stiff arms and shoves his way through the Browns defense for a 64-yard TD run.

Factoid: Peterson, who finished with 180 yards and three TDs, vomited at halftime and got pumped with IVs while blood gushed from his left forearm. pic.twitter.com/wvcw9wVItX

Dec. 30, 2012, vs. Green Bay: The eventual NFL MVP capped a historic season with 199 rushing yards in a three-point victory over the Packers to clinch a playoff spot for the Vikings. The 27-year-old Peterson, a year removed from a torn ACL, entered the season finale needing 208 rushing yards to break Eric Dickerson’s single-season record. He took five carries for 36 yards on the final drive to set up the winning field goal. Peterson settled for 2,097 on the season, becoming only the seventh running back in NFL history to eclipse 2,000 rushing yards.

Vikings vs Packers Week Video Flashback #21: Marvel the 2012 comeback season of Adrian Peterson, capped by him putting the Vikings on his back and running for nearly 2,100 yards. Even Joe Buck sounds like a fan. Thanks Adrian – Viking fans did not forget you! @AdrianPeterson pic.twitter.com/IjcrfKxrlA