Getty An Alabama recruit is already drawing comparisons to Will Anderson.

Alabama recruit Yhonzae Pierre is already drawing comparisons to Crimson Tide superstar Will Anderson. Pierre, a four-star defensive end ranked 199th among members of the class of 2023 by ESPN, is entering his senior season at Eufaula High School in Alabama. His new coach made a bold comparison to the All-American Anderson while previewing the upcoming season.

“I think he could be just as good as Will Anderson if he continues to improve,” Jerrel Jernigan, who is in his first year as Eufaula’s coach, told AL.com. “I know that is difficult for me even to say. But that is the potential Yhonzae has. He needs to add some weight obviously when he gets there and find that constant motor that Will has. But he’s going to be something special.”

Jernigan, a native of Eufaula, starred as a wide receiver at Troy and played three seasons in the NFL, winning a Super Bowl with the New York Giants in 2012. Pierre committed to Alabama in April 2022.

“God I thank you for this blessing,” Jernigan tweeted, “I also want to say thank you to my parents, family, teachers and coaches for helping me along the way. I’ve found my new home I’m committed to the University of Alabama. Roll Tide Roll.”

Jernigan told AL.com, “Since I took over basically in the weight room, he’s been a different type player. He is taking the game seriously and becoming a vocal leader. He’s always led by his actions. Now, he’s going all out in the weight room. He needs to add pounds to get to the next level, and he’s doing that.”

Robert Brown, Eufaula’s defensive line coach, told AL.com, “We obviously expect Yhonzae to be a leader this year, to push himself and his teammates and to go out and produce every single play. When he gets to Alabama, he can be a guy. He will continue to get bigger and stronger there. He can definitely be a multi-year starter at Alabama and a potential NFL draft pick.”

According to The Athletic, Pierre recorded 26 tackles for loss and 12 sacks during his sophomore and junior seasons at Eufaula combined. He also had offers from Auburn, Georgia, Mississippi State, Florida, Florida State and Georgia Tech. Pierre will be part of a 2023 recruiting class ranked by many as the best in the nation. 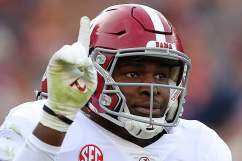 Pierre Is Also Drawing Comparisons to His Cousin, Courtney Upshaw

#Alabama commitment Yhonzae Pierre won every rep with ease at the Tide’s OL/DL camp. One of the top three performances of the summer camp season in Tuscaloosa per every person I’ve talked in the last few days. @bamainsider #RollTide https://t.co/smdCFlDIUO

AL.com ranked Pierre as the No. 7 senior in Alabama heading into this season. AL.com’s Randy Kennedy wrote in his scouting report of Pierre, “Yhonzae Pierre has drawn comparisons to fellow Eufaula Tiger Courtney Upshaw, who gained 50 pounds after he got to Alabama and eventually became an NFL star. As an outside linebacker, Pierre is Upshaw’s equal as an athlete at this stage of his career.”

Upshaw, who played for the Crimson Tide from 2008 to 2011, is Pierre’s cousin, according to SI.com’s Bama Central. Pierre told the site that Tide head coach Nick Saban “likes me in the three-technique, five-technique and dropping back in coverage. I’m comfortable with all that. I can do it all. I can play tight end, too.”

The 6’5″, 223-pound Pierre and Eufaula begin their 2022 season on August 26 against Stanhope Elmore. Pierre, who also plays basketball, helped the Tigers make the state playoffs in 2021. 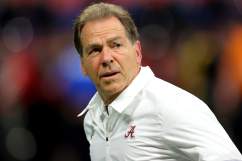