Getty Nick Saban said 2021 was a "rebuilding year" for Alabama.

Paul Finebaum called out Alabama Crimson Tide football coach Nick Saban over his recent comments claiming 2021 was a “rebuilding year,” calling his statement an “excuse.” Saban made the comments during a radio show appearance on August 3 and the SEC Network personality hit back on ESPN’s “Get Up” a day later.

Saban said during an interview on McElroy and Cubelic in the Morning on WJOX, “Last year, we kind of had a rebuilding year. So, we should have nine starters back on offense, nine on defense but six guys go out early for the draft, so now we have five back on offense and seven back on defense.”

Saban added, “So, that, in and of itself creates a few more question marks but it also creates opportunity for other players to be able to shine in the program and contribute in a positive way. So, nobody knows for sure how all this stuff is going to sort of come to fruition but that’s part of the excitement and challenge that we have to try to develop a team.”

On “Get Up,” host Mike Greenberg pointed out that last years’ 13-2 Crimson Tide team won the SEC and made it to the National Championship game with a Heisman-winning quarterback, setting up Finebaum to respond to Saban’s comments.

“This is very predictable if you follow Nick Saban closely. Whenever he loses a game, like a national championship game, here comes the excuse,” Finebaum said on the ESPN show. “Here comes the Nick Saban grievance tour. I mean sometimes I don’t know whether Nick Saban is trying to continue to be the greatest coach of all time or he wants Jimmy Kimmel’s job. I don’t really understand it.”

Finebaum Said Saban’s Comment Are ‘Not a Great Look

Finebaum added, “Quite frankly, at some point it’s not a great look. I know that’s not a popular thing to say where I live because Nick Saban can do no wrong. But first it was NIL that he was complaining about over and over and over. And now he’s quibbling about what happened last year.

Finebaum said, “You can go in the past, everytime he loses one of these games, he called the Sugar Bowl a couple years ago a consolation game. He blamed the NFL Draft on the loss to Ohio State when Ezekiel Elliott was there. There’s always something with Nick Saban, but we still love him, don’t we?”

During his interview with Cole Cubelic and former Alabama quarterback Greg McElroy, Saban said, “I think maybe people don’t realize even when we did summer scouting reports this year on other teams it’s much more difficult to figure out how all the changes on a roster is going to impact the success of a team. You have teams in our league that have 10 to 15 new players, not recruits, people that came from other conferences and other parts of the country that you don’t really know about.”

Saban added, “How that’s going to impact our team and other teams is really probably a question mark that I’m sure a lot of coaches are wondering about. And, I’m excited about the guys that we have that our new to our program, new to our team and I’m excited about the young players that we have to develop and which one of those guys will actually be able to contribute.”

Nick Saban just told us on @macandcube that

"Last year was a rebuilding year"

Alabama is heading into the 2022 season as the favorite to win the National Championship, but Ohio State and Georgia are right on their heels, according to the preseason betting odds. Finebaum was asked by Greenberg if this year’s Alabama team will be the best Saban has had.

“It could, but there’s concern inside that building about the offensive line,” Finebaumm responded. “That’s pretty important and it’s even more important when you have Bryce Young, because toward the end of the season he was rushed all over the place. Auburn nearly beat him, a team that tried to fire its own coach. So that’s the issue. Saban’s best teams don’t always win. I thought the best team I’ve seen was like five years ago and Clemson beat them. So you don’t know for sure. But he’s got the best quarterback, he’s got the best defensive player, that’s a good place to start when you have the best coach of all time.”

Alabama’s defense coming into this season is winning high praise from talent evaluators. An NFL executive told Heavy on August 4, “All five of Alabama’s defensive backs could go Round 1,” adding that defensive end, “Will Anderson might be the best player in college football this season.” 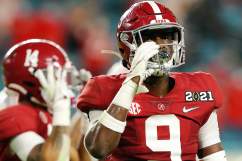