The Cincinnati Bengals cornerback Eli Apple spent the past 24 hours tweeting off a storm of trash talk about Buffalo Bills quarterback Josh Allen and wide receiver Stefon Diggs, however, the 27-year-old took things a step too far by invoking Damar Hamlin in one of his taunting messages.

Apple reposted Diggs’ tweet defending his postgame behavior following the Bengals’ 27-10 beatdown over the Bills in the AFC Divisional round. Diggs tweeted, “It’s easy to criticize my reaction than the result,” for which Apple retweeted and wrote, “Cancun on 3 🫶🏿,” which was met with immediate backlash for being a classless joke.

Hamlin’s No. 3 jersey number and his heart-shaped hands gesture have become a message of hope amid the safety’s remarkable recovery after he suffered cardiac arrest at Paycor Stadium on January 2, and Bills defensive end Shaq Lawson sent a strong threat to Apple to get it together.

You played a good game @EliApple but disrespect my boy @HamlinIsland situation that shit get you beat up frfr. Keep it on the field.

Lawson tweeted, “You played a good game @EliApple but disrespect my boy @HamlinIsland situation that s*** get you beat up frfr. Keep it on the field.”

Lawson’s tweet quickly went viral. While some people didn’t buy the threat, “Bet you won’t pull up on him #twitterfingers,” one man tweeted, another person responded, “Ask Lenny Fournette,” referring to the 2018 on-field brawl between the Bills defensive end and the Jaguars running back.

Diggs also chimed in on Tuesday to reply to Apple’s tweets, but kept it brief. “🌽 clout chasing,” the All-Pro receiver wrote.

While Bengals fans defended Apple’s trash talk, Bills Mafia loved seeing Lawson and Diggs have Hamlin’s back. One fan tweeted, “@Shaq_Lawson90 thanks for stepping in. Mafia just wasn’t getting through to him. Maybe you and our team can. Love you guys! The MAFIA stands behind you all! Go Bills!” while another person responded, “I didn’t think there would be anything outside of playing Tom Brady that could get me to root for Kansas City to win. The antics in the attitude of the Cincinnati players, I think that’s just got me on the Kansas City bandway again, at least for one week.”

One person tweeted to Diggs, “You OWN that fraud,” while another fan wrote, You can’t buy class, you either have it or you don’t. It’s very apparent @EliApple had none!”

Lawson Is Set to Become an Unrestricted Free Agent This Offseason

Back in March 2021, the Bills’ former first-round pick from the 2016 NFL Draft literally begged on Twitter to “come back home” to Buffalo, and a few weeks later, signed a one-year, $1.1 million deal to return.

Following his breakout year, Lawson was offered a three-year, $30 million contract to sign with the Miami Dolphins, and he took it, but the Clemson alum was ultimately traded to the Houston Texans after the season ended. Lawson never played an official snap with the Texans, as Houston traded him to another one of the Bills’ AFC East rivals, the New York Jets, where he was released just before the final regular season game — a matchup against the Bills, natch.

In an interview with Spectrum News 1 Buffalo published in November, Lawson reflected on his decision to sign with the Dolphins. “At the time I thought that was the best decision for me,” he said. “Looking back… I’d probably say that’s probably the worst decision I made.” 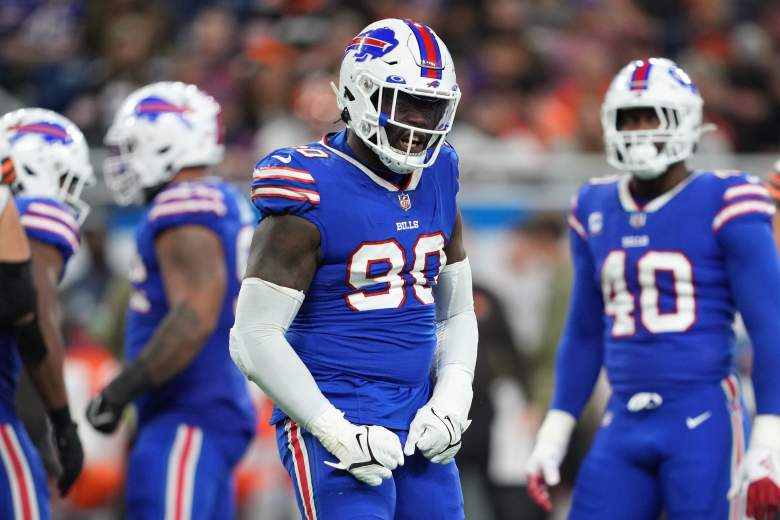 GettyShaq Lawson #90 of the Buffalo Bills celebrates after a play vs. the Cleveland Browns at Ford Field on November 20, 2022.

Lawson would love to stay in Buffalo. The 28-year-old refers to Buffalo as “home,” and gives major credit to Bills head coach Sean McDermott for allowing him to transition back to his old self. “McDermott just let me be myself. Once he came to me when I signed back and said ‘Be yourself. Be that dog you used to be.’ Once I got that, that okay to say so, it just opened my game up and made me feel more comfortable. I still got it. I haven’t lost it yet.”

Lawson finished the regular season with 19 solo tackles, 3.5 sacks, and one forced fumble. In the postseason, he added two more solo tackles and two quarterback hits.