Fans of the Chicago Bears are going ballistic over quarterback Justin Fields’ latest social media activity. The former Ohio State quarterback has been one of the more intriguing prospects in the draft this year, and rumors have been swirling for weeks that the Bears may be plotting to move up in the draft to add a quarterback.

Now, Bears Nation is going berserk over a video Fields posted on social media. The Chicago Cubs were in Atlanta playing the Braves, and Fields — who is a Georgia native — was in attendance to root for Atlanta. Still, that matters little to a fan base starved for a legitimate player at the quarterback position, and when Bears Twitter got wind that Fields was at a Cubs game! –forget about the fact that he was technically at a Braves game — let’s just say emotion took over.

Even as a White Sox fan I endorse this tweet

Fields to the Bears confirmed https://t.co/ou2HmOms5p

Good seats. Behind the Cubs dugout, too. 🧐 https://t.co/iRc5nenKvd

There were also several Twitter users who brought Bears fans back to reality, however:

It's a home game for the Atlanta Braves. Justin Fields is from Kennesaw, Georgia, which is about 20 minutes away from Truist Park.
Calm down people, nothing to see here. https://t.co/Rh2ZiVMekz

Check out the “A” in right field. That’s Atlanta, bro

The latest Bears news straight to your inbox! Subscribe to the Heavy on Bears newsletter here! 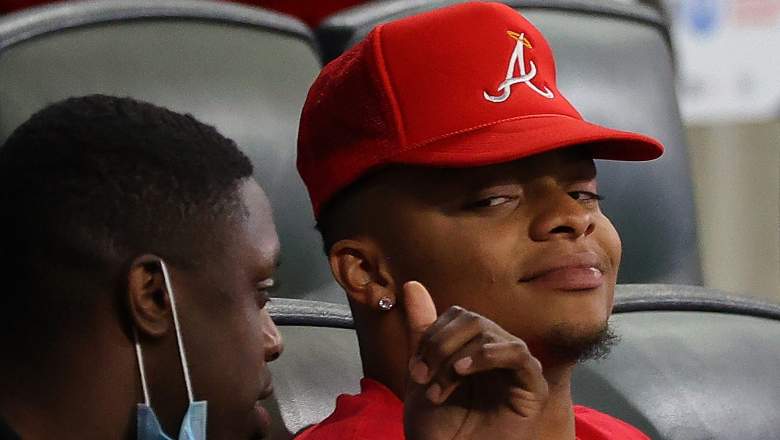 GettyNFL quarterback prospect Justin Fields watches the game between the Atlanta Braves and the Chicago Cubs at Truist Park on April 26, 2021 in Atlanta, Georgia. (Photo by Kevin C. Cox/Getty Images)

Some analysts and insiders — such as NBC Sports’ Chris Simms — are projecting that Fields may fall from a potential top-three pick to somewhere late in the first round. If that happens and he’s there for the Bears without the team having to trade up or surrender any draft capital for him, it would be a huge gift and a no-brainer for Chicago, who currently hold the 20th overall pick.

After transferring from Georgia to Ohio State, Fields served as the Buckeyes starter for the 2019-2020 seasons. He started 22 games for OSU in that span, completing 68.4 percent of his passes for 5,373 yards, 67 touchdowns and just nine interceptions. He finished fifth in the nation in adjusted completion percentage last season (80.8 %), and his ability to take off and run with the ball is top-notch.

Fields had grades from Pro Football Focus of 94.5 on passes in the 10-19 yard-range (and a 124.0 rating) and a mark of 96.5 for passes 20+ yards (117.2 rating) last season. He has been criticized for shaky performances against Northwestern and Indiana last year, and his decision-making and processing speed need work, but he has all the tools of a starting quarterback in the NFL.

You’ll hear about the knocks on Fields throughout this draft process, from the track record of Ohio State quarterbacks to his ugly games against Indiana and Northwestern to his slow processing and decision-making. I’m not here to say those concerns aren’t valid, but the physical tools and leadership he brings to the position are too great to ignore. Over the course of his career, Fields has been one of the most accurate quarterbacks we’ve ever charted. In his first game against Nebraska this season, he didn’t let go of a single off-target pass. Add in his rushing ability, and that’s a winning combo.

It’s true that quarterbacks out of Ohio State haven’t made a ton of noise in the NFL. They’ve barely made a whisper. But it’s equally true that there’s a first time for everything, and Fields has as good a chance as anyone to succeed in the league. Now, it’s a waiting game for the Bears and their fans, who clearly are hoping the team takes a big swing at the most important position in sports.

READ NEXT: QB Kellen Mond on Leadership, the Draft & His Incredible Family History