Getty Linebacker Manti Te'o was one of six players the Chicago Bears did not re-sign this week.

The Tyler Bray era has officially come to an end in the Windy City.

On Monday, the Chicago Bears let the contracts of six practice squad players expire, including Bray’s, according to the NFL’s official transaction report for January 18. Bray, who spent the last three seasons as the team’s third-string quarterback, came to Chicago when Matt Nagy arrived as head coach in 2018. He has been with the team ever since, but 2020 was his last year of practice squad eligibility, meaning the team couldn’t have renewed his contract even if it wanted to. 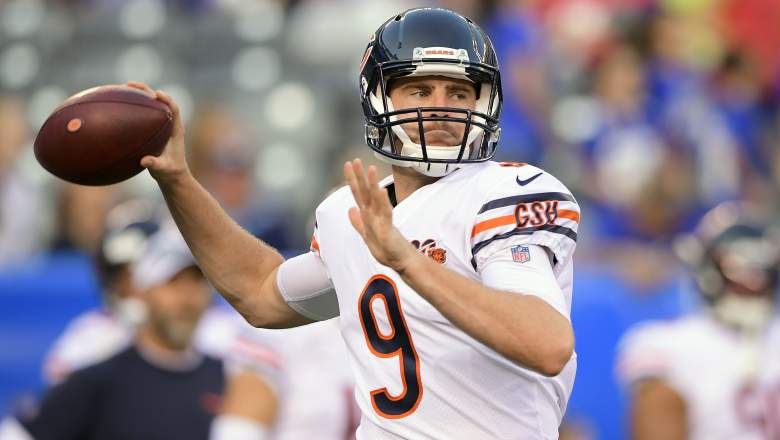 GettyQB Tyler Bray has spent the last three seasons on the practice squad of the Chicago Bears. He was one of six players who saw their contracts expire with the team this week.

T’eo, Bond, Bray and Kush were all moved up to the active roster at one point or another this season, with T’eo actually drawing the start in the Bears’ final regular season game against the Green Bay Packers. After starting linebacker Roquan Smith went down with an elbow injury in Week 16, T’eo filled in the following week, netting six total tackles in the loss.

Bray was the team’s longest-tenured practice squad player, and the preseason will certainly look different without him.

In his eight preseason games with the Bears, Bray completed 113 of 183 passes for 1,260 yards, three touchdowns and three interceptions with a passer rating of 80.0. The 29-year-old saw his first and only regular season action for Chicago in Week 8 this year, when the veteran came in for an injured Foles against the Minnesota Vikings. With Trubisky inactive nursing a shoulder injury, Bray entered late in the fourth quarter, going 1-5 for 18 yards.

The Bears have seven offensive players, including four wide receivers, along with five defensive players, signed to reserve/future contracts so far this offseason. Chicago had signed quarterback Kyle Sloter to its practice squad during the season, but the Las Vegas Raiders added him recently so it remains to be seen who the team will bring in this year to fill Bray’s role.

Here’s the full list of players the Bears have signed to reserve contracts to date, including a few familiar faces:

READ NEXT: Allen Robinson’s Latest Twitter Activity Does Not Bode Well for Bears

Loading more stories
wpDiscuz
0
0
Would love your thoughts, please comment.x
()
x
| Reply
The Bears have moved on from six practice squad players, including a favorite at QB.