Getty Noah Vonleh was signed by the Bulls on Thursday.

Thanksgiving brought a bounty of new additions to the Bulls.

To increase competition and weed out who will stay with the franchise during a transitional year under new management, the Bulls signed sixth-year big man Noah Vonleh and second-year guard Zach Norvell.

The Bulls currently have 19 players rostered entering training camp next week and will have to trim to 15 players by Dec. 21, the day before the regular season begins.

With 15 players already under guaranteed contracts, training camp will be a proving ground of who will stay as the added fat to the roster will either be waived or traded in an organization that has not shied from moving on from the former regime after releasing both Kris Dunn and Shaquille Harrison.

There’s room for one more player at training camp as Arturas Karnisovas continues to search for the right candidates to rebuild the franchise that went 22-43 last season.

The former No. 9 overall pick in 2014 and has been a journeyman throughout his playing career, playing for six teams in six years — which included a 21-game stint with the Bulls in 2017-18. He started four games and averaged 6.9 points and 6.9 rebounds with the Bulls.

Vonleh, 25, is still just a young big trying to carve his mark into a roster. After struggling as a scorer early in his career, Vonleh’s move to center last season paid dividends as he posted his highest effective field goal percentage (.582) of his career.

What Vonleh makes up for in scoring is athleticism and speed at his size, boasting his strongest body of work on the defensive side of the ball. Matched up with Giannis Antetokounmpo in 2018, Vonleh kept the Milwaukee Bucks star in check for 30 points on 21 shots, including a block that shocked the league.

He’ll likely be a situational defender if he makes the final roster, however, his presence does put pressure on the Bulls’ bigs as Karnisovas brought in a free-agent former add of his from the Nuggets.

Thaddeus Young has been touted as a potential trade candidate with one guaranteed year left on his contract. Cristiano Felicio and Luke Kornet be candidates to be waived as well dependent on the development of first-round rookie Patrick Williams. 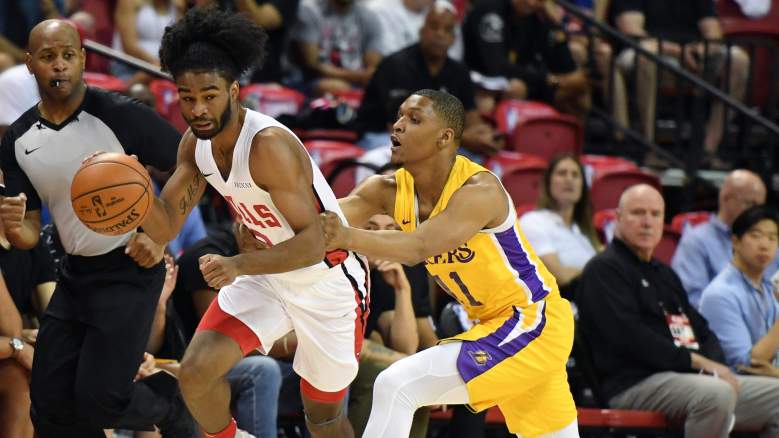 GettyCoby White of the Chicago Bulls is fouled by Zach Norvell Jr. of the Los Angeles Lakers. Norvell was signed by the Bulls on Thursday.

He’s viewed as a 3-and-D prospect, with his shooting being his better strength entering the league, shooting 38.7 percent in the G-League last year.

If Norvell proves his worth in training camp, he could be a valuable piece to coach Billy Donovan who must replace two of the team’s best defenders at the guard position in Dunn and Harrison.

Read More
Chicago, Chicago Bulls, NBA
The Bulls roster now sits at 19 players, making for an interesting month of December when the team will have to trim down to 15.