The Pittsburgh Steelers and Cleveland Browns are set to meet up on Sunday in a battle with major AFC North implications, with the two squads combining for just one loss this season.

But much of the chatter leading up to the matchup is going to be about Browns star defensive end Myles Garrett going up against the Steelers for the first time since the infamous helmet-bashing incident with Mason Rudolph last season that sparked a brawl between the rival teams. But Pittsburgh’s no-nonsense head coach Mike Tomlin isn’t pushing that narrative.

“They’re a 4-1 team,” Tomlin said Tuesday. “We’re trying to remain undefeated. We’re not looking for that low-hanging fruit or that reality TV storyline and so forth. This is a big game here in 2020.”

Steelers coach Mike Tomlin is on fire today. Asked about the Myles Garrett/Mason Rudolph return match, he answered, "We’re not looking for that low-hanging fruit or that reality TV storyline. This is a big game here in 2020."

Tomlin said there’s no special message he’s preaching to his team in advance of seeing the Browns.

“There really is no message,” he said. “My day-to-day existence kind of relays that message that you suggested. There’s a lot on the table in reference to this game, in terms of stakes.”

Myles Garrett Eager to Put Helmet-Bashing Incident in Past

Garrett has admitted fault in the incident with Rudolph, but doubled-down that it was a racial slur that sparked his actions.

“He called me the N-word. He called me a ‘stupid N-word,'” Garrett told ESPN’s Mina Kimes in a sit-down interview following his indefinite suspension. However, Rudolph and his representation called that claim a “bold-faced lie.”

Garrett has said he’d be open to having a sit-down with Rudolph if the Steelers backup QB was open to it.

“If it were to happen, I’d be fine with it. Not just fine, but I wouldn’t mind it and I’d be happy to make it happen, if there were a way. I’m not sure how I’d go about that, how I’d broach that,” Garrett told Mary Kay Cabot of cleveland.com in September. “I’m not even sure if he’d want to do that but I wouldn’t have a problem sitting down with him and just not talking about the incident, just talking man-to-man, how we move forward, and just being better men and football players and not letting something like that happen again.

“Whether we can do that, I’m not sure, but I’d be willing to extend the olive branch and make that happen.” 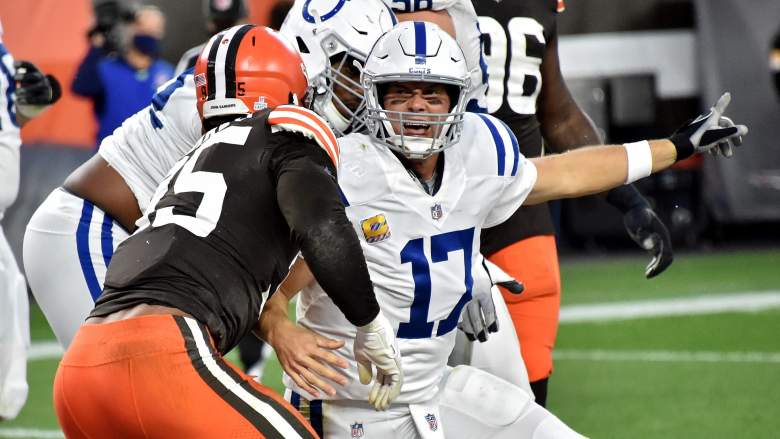 GettyPhilip Rivers of the Indianapolis Colts reacts after being hit by Myles Garrett.

Garrett signed a five-year, $125 million contract extension with Cleveland this offseason and has proved to be worth every penny so far in 2020, emerging as arguably the league’s top edge threat.

Garrett has six sacks through five games and has forced a trio of fumbles. He also forced a safety last week against the Colts, with Philip Rivers being called for intentional grounding in the end zone as Garrett applied pressure.

“I can promise you on Wednesday morning in the opponent’s meeting rooms, they have a big circle on No. 95 and they may be referring to him as a game-wrecker because he has that ability to wreck the game from their perspective,” Browns head coach Kevin Stefanski said. “He is applying pressure. Even when he is not getting home, he is applying pressure, and it should open things up for the rest of our guys. I think he is working really, really hard. He prepares on Wednesday, Thursday and Friday and then he performs on Sunday.”

READ NEXT: LeBron James Comments on Plans for Anthony Davis’ Future With Lakers