It all started after Mathieu commented on a tweet likening his situation to Seattle Seahawks safety Jamal Adams, who received a four-year, $70 million contract extension Tuesday, per NFL Media’s Ian Rapoport. A person with the Twitter handle @xxisaacgogelxx commented on the same tweet Mathieu did, mentioning how they felt the Chiefs safety played very poorly on the Buccaneers’ touchdown-scoring drive right before halftime of Super Bowl LV.

Mathieu and the Twitter troll were going back and forth when the conversation turned towards Tampa Bay receiver Mike Evans, who the troll felt Mathieu held in the end zone right before halftime, which set up a first-and-goal situation for the Buccaneers due to a flag being thrown on Mathieu. Here’s some video of the aforementioned play for some context:

Mathieu’s next comment is what this is all about.

“Ball was on 10 yard line,” Mathieu tweeted. “[QB] threw ball out of back of end zone… tell me how that’s a flag? Also show me a Mike Evans TD where he didn’t push off lol or used his hands to create separation…”

Mathieu deleted the tweet a few hours later, but Heavy was able to obtain a screenshot of the tweet. 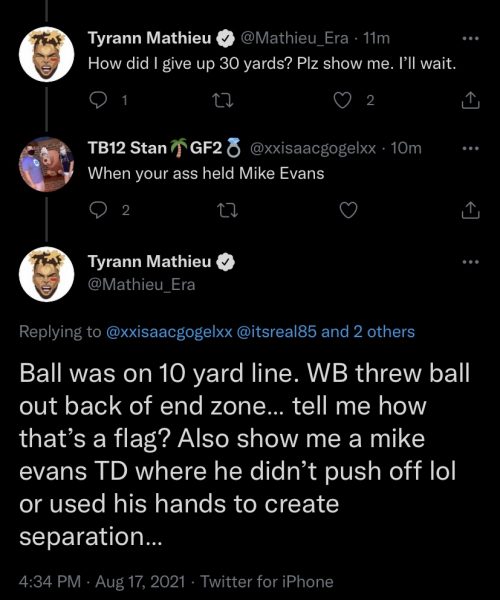 There’s plenty of reason to believe that the way that play transpired didn’t merit a holding penalty, especially because the ball sailed out of the backside of the end zone and was uncatchable, even for someone with as large of a frame as Evans. But that play aside, Mathieu wanted to share his true thoughts on Evans, even if he may have regretted it later on, which may have caused him to delete the tweet.

Based on PFF’s coverage stats, that was the only target Evans received with Mathieu covering him during the Super Bowl. So we can’t get into a conversation of who got the better of who in the game.

Mathieu Ticked Off By Extension Talks?

One has to wonder if all the conversation regarding Adams’ massive contract extension ticked off Mathieu a bit.

Mathieu, who is in the last year of his three-year, $42 million deal with Kansas City, wants to stay with the Chiefs past 2021 but has been unable to reach an extension agreement with the team. Kansas City general manager Brett Veach talked about extension talks with Mathieu during an interview with SiriusXM NFL Radio Tuesday, August 17, saying how he’d like to make sure Mathieu remains with the Chiefs.

"We know he wants to be here. Right now, for us and for him I think it's just a timing thing."

“We’ve had a chance to talk to Tyrann and his representation and I think it’s a little bit difficult with the landscape right now of having two cap-shortened offseason, and where we are in regards to our offseason projections,” Veach said, via Heavy’s Vinciane Ngomsi. “But as we’ve discussed with Tyrann and his crew, it’s one of those situations that where we are now will certainly not be where we are once the season ends and once we correct some of the things when you have extensions, conversations, trades, [players who] move on — every team is certainly in a different position [with] what their books say than they will be in the offseason. And we like to think that we’re going to find a way to get this done. And he knows we love him and we know he wants to be here. And right now for us and for him, I think it’s just a timing thing. But there’s not a guy in this league I respect as much as him for the way he goes about his business.

“And a lot of these guys, and a lot of these teams — I think we saw the franchise tag period come and go and no one got done. And there’s been a couple deals, but a lot of these bigger deals haven’t been done for the same reason. Different players handle it in a different way. And just like you’d expect from Tyrann, just complete class. I mean, the guy is special. We love him. And we’re certainly going to work our tail off to keep him here.”

Make sure to follow Devon Clements on Twitter @DevClemNFL for more news and info regarding the Kansas City Chiefs.