The championship chase is officially back on for the Los Angeles Lakers and they could be bringing a familiar face with them in previously released big man DeMarcus Cousins.

The Lakers parted ways with Cousins in February, waiving the four-time all-star to make room for Markieff Morris. Cousins did not play a game for the Lakers before his release and had been rehabbing from a torn ACL he suffered this summer. He was hoping to make his return during the season, but much was still uncertain and the Lakers chose instead to add a player that would make an immediate impact in Morris.

However, the NBA’s newly-announced return following an extended hiatus due to the COVID-19 pandemic has sparked the possibility of a reunion between Cousins and the Lakers.

The NBA’s board of governors and the players’ union both approved plans to resume the season on July 31 inside Walt Disney World’s ESPN Wide World of Sports complex. The league is still working out the details, but there is speculation that rosters could expand to hold 17-20 players.

If that’s the case, ESPN’s Dave McMenamin could see the Lakers pulling the trigger and bringing Cousins back in — if healthy.

“With the extra time off to rehab, combined with potential expanded rosters, will Cousins make his return to L.A.?” McMenamin wrote. “The former All-Star center would give the Lakers the stretch 5 they missed most of the season and, with crowd noise a nonfactor in Orlando’s empty arenas, he could certainly have an impact as a vocal bench presence.”

The Lakers currently have 15 players under contract, with Kostas Antetokounmpo and Devontae Cacok serving as the team’s two-way players. 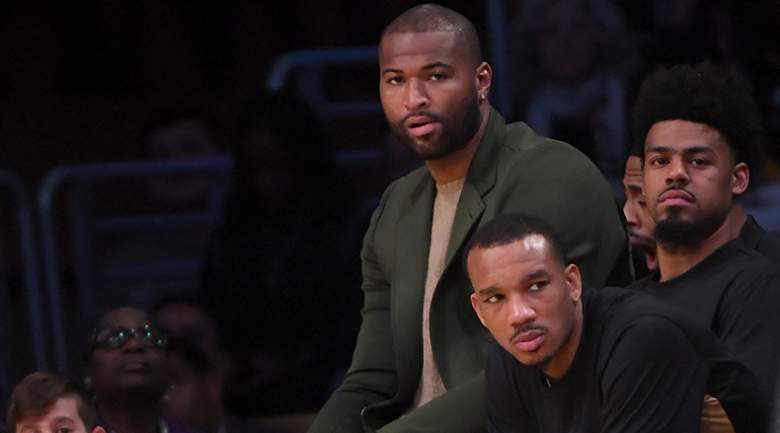 While Cousins did not suit up in the purple and gold last season, he still made an impact with his locker room presence and personality.

“DeMarcus has been here rehabbing and been a great member of this team behind the scenes that nobody gets to see because the only thing he can do is be a good teammate and travel, and show up to every game and have a good attitude,” Lakers guard Alex Caruso told Kyle Goon. “And he’s done that and been one of the best teammates as far as just keeping everybody’s energy high and not too low.”

If the Lakers and Cousins were interested in a reunion, it could happen in the coming weeks. ESPN’s Adrian Wojnarowski reported on Monday that the NBA is going to open up their transaction window on June 22, allowing all 30 teams to make roster moves.

Reporting on @SportsCenter with @DavidLloydESPN on NBA’s plans for rosters and teams left out of Orlando. pic.twitter.com/RbOATiRp5F

How DeMarcus Cousins Would Contribute to Lakers

The Lakers already have quite the depth chart assembled when it comes to big men in a resurgent Dwight Howard and always entertaining JaVale McGee. However, Cousins would be something different, giving the Lakers a stretch 5 they currently don’t have on the roster.

It was also a dream of the Lakers to see what Cousins would look like next to his old New Orleans Pelicans teammate Anthony Davis. That partnership was cut short by another Cousins injury when he ruptured his Achilles tendon.

“We clicked,” Cousins told Matt Barnes and Stephen Jackson on their Showtime show, All the Smoke. “It was, I believe, something special. I think we could’ve went on a run. Once we got everything around us correct, there was no stopping us.”

When healthy, Cousins was a walking double-double, averaging 21.2 points and 10.9 rebounds for his career. He also has career averages of 3.2 assists, 1.4 steals and 1.2 blocks per game and shoots just around 33 percent from 3-point range.

Loading more stories
wpDiscuz
0
0
Would love your thoughts, please comment.x
()
x
| Reply
The championship chase is officially back on for the Lakers and they could be bringing a familiar face with them in DeMarcus Cousins.