One of the Vikings‘ most interesting 2020 draft picks had a major setback at training camp.

Defensive end Kenny Willekes, a seventh-round draft pick, suffered an injury in a team scrimmage at U.S. Bank Stadium on Friday and was seen leaving on crutches, per Zone Coverage’s Sam Ekstrom.

A source close to Willekes told Heavy on Wednesday that his injury is a torn ACL — likely leaving Willekes out for the 2020 season. Willekes was impressive at training camp but was bound to be placed on the practice squad due to the number of veterans on the defensive line, including the addition of Yannick Ngakoue.

Heavy reached out to the Vikings for comment but have not heard back as of Wednesday morning as the team has the day off. The team moved Willekes to their injured reserve list Wednesday afternoon.

Willekes, a walk-on at Michigan State turned Big Ten’s Defensive Lineman of the Year won the Spartans’ most valuable player award in both 2018 and 19, and the Burlsworth Trophy, awarded annually to the country’s best player who was a former walk-on.

After earning recognition as the Big Ten’s top defensive lineman in 2018, Willekes intended to declare himself eligible for the NFL draft, but an injury sidelined those plans.

Willekes broke his fibula in the Spartans’ Redbox Bowl loss to Oregon that season and spent the spring rehabbing his leg to play his senior season. Willekes made a full recovery by May when he was given full clearance to begin working out. He attended Von Miller’s Pass Rush Summit in Las Vegas that June, per the Detroit Free Press. 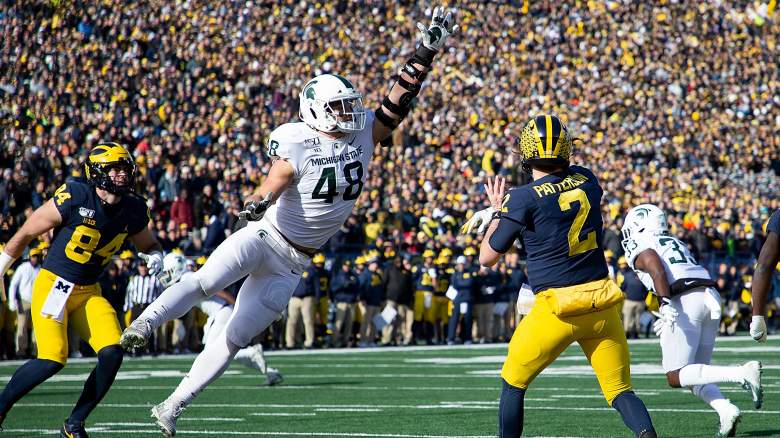 GettyWillekes recorded himself running up walls, doing backflips and hitting splits before the 2020 NFL Draft.

Drafted 225th overall, Willekes was regarded as the top pass-rusher steal of the 2020 draft, per NFL Network’s Charles Davis. ESPN’s Mel Kiper called him a “classic overachiever” this offseason.

“He’ll have to battle his way onto that roster. I think you look at a guy, a classic overachiever. He doesn’t have long arms… but he has that knack for getting after the quarterback,” Kiper said. “He anticipates that snap and wants to beat that offensive tackle out of his stance, and he does it a decent amount of times… He’s the kind of guy I wouldn’t want to bet against because he’s overcome the odds and became a heck of a player at Michigan State for the Spartans.”

Willekes’ arm length was the biggest concern to hit his draft stock. He tested in the 88th percentile for bench press, 84th percentile for his broad jump, and above average in his 40-yard dash and vertical jump among defensive linemen. He also ranked in the top 10 at his position in most NFL Scouting Combine measurables, including his 32 bench press reps which were the second-best mark.

Despite his proven athleticism, Willekes, considered a third- to sixth-round prospect, slipped to the seventh round as 28 defensive linemen were selected before him.

Loading more stories
wpDiscuz
0
0
Would love your thoughts, please comment.x
()
x
| Reply
One of the Vikings' most interesting 2020 draft picks had a major setback at training camp.