Getty Mike Zimmer revealed his ongoing relationship with Teddy Bridgewater, who returns to Minnesota with the Carolina Panthers on Sunday.

Vikings coach Mike Zimmer never thought he’d have another quarterback in his coaching career when he and general manager Rick Spielman drafted the 2014 first-rounder.

Bridgewater, 23, was coming off a 2015 sophomore campaign where he led the Vikings to an NFC North title-clinching victory over the Green Bay Packers in the final game of the regular season.

Bridgewater planted his foot wrong and suffered an ACL tear and dislocated knee late in Vikings training camp the following summer that, had there not been a quick response to the injury, could have led to Bridgewater losing his leg. The Vikings, which had a team coming off an NFC Championship Game appearance, decided to move on from Bridgewater and sign Kirk Cousins in the 2018 offseason — a costly replacement than Zimmer was not fond of at the time.

“I always told him, ‘You and I are going to be together forever. My career is going to go as long as your career goes.’ But it just didn’t work out that way,” Zimmer said in 2018 after Bridgewater’s free-agent departure. “I always remembered Teddy as the quarterback who went 11-5 and beat Green Bay up there for the division.”

The decision to let Bridgewater go was a difficult one. The Vikings commissioned a study to see how other athletes’ fared after suffering similar injuries. There were few examples and even less encouraging outcomes, The Athletic’s Chad Graff reported.

Bridgewater beat the odds, resurfacing as the Carolina Panthers starting quarterback after a four-year journey that included stints with the New York Jets and New Orleans Saints. Zimmer keeps in contact with Bridgewater to this day. Zimmer, who often keeps a poker face in press conferences, said this week that he’s rooting for him in 15 games this season. “Just not when we played them,” Zimmer added.

Bridgewater will reunite with Zimmer this week when the Panthers visit U.S. Bank Stadium in what will be Bridgewater’s first start in the building he and Zimmer expected to share many Sunday afternoons in. Instead, they’ll be on opposite sidelines on Sunday. 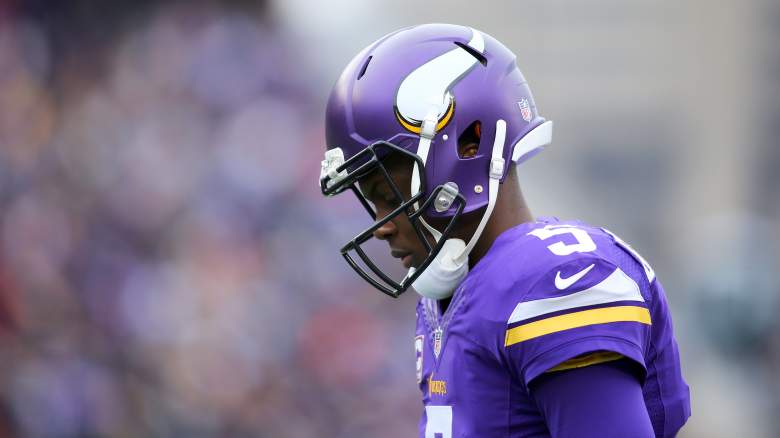 GettyBridewater had an infectious personality that grew on Zimmer.

Zimmer’s brash persona has made him a fan favorite with his blunt approach to coaching. Not that Zimmer doesn’t have a soft side for his players, but with Bridgewater, it really showed.

Graff detailed how Bridgewater’s infectious personality and ability to befriend anyone in the locker room from the first day of training camp landed him as one of the franchise’s most beloved players early.

Here’s an anecdote from Graff that should strike a chord if you’re familiar with the coach-player duo:

Even after the Vikings traded for Sam Bradford in an attempt to keep their Super Bowl hopes alive, Zimmer remained attached to the first quarterback he drafted. A few days after emergency surgery, Bridgewater began returning to the facility for rehab work.

The training room isn’t a place often visited by head coaches, but when Bridgewater was there, Zimmer would stop by to catch up. During one September visit to the training room, Bridgewater was sitting on a table shoeless. Usually, Xavier Rhodes helped him take the shoes off and put them back on since Bridgewater couldn’t yet reach his feet. But on this occasion, Zimmer took the task for himself. He helped Bridgewater get his shoes on and then tied the laces.

Before every game, Bridgewater takes a moment on the sidelines and tells himself the same two words: “You’re blessed,” Graff wrote.

“I say those two words to myself knowing what I’ve gone through to get back to this point,” Bridgewater said.

After signing a contract with the Panthers, Bridgewater recounted his recovery by sharing a video of him on crutches just hours after surgery in 2016.

Came back from this just to lay down…? You out your damn mind. pic.twitter.com/rQGkr9HcQ5

He also shared this letter he wrote to the day his life changed, pivoting that it too had been a blessing.

While riding in back of that ambulance, I didn’t know what my football future had in store for me. In the midst of so much uncertainty and pain, I found peace and my purpose in life.

Bridgewater is currently completing a career-high 72.1 percent of his passes and has 16 total touchdowns in the midst of a 3-7 start this season with an upstart Panthers team that has been without All-Pro running back Christian McCaffrey. Bridgewater and the Panthers will look to end a five-game losing streak on Sunday while the Vikings look to pick up a win and keep their playoff hopes alive.

Loading more stories
wpDiscuz
0
0
Would love your thoughts, please comment.x
()
x
| Reply
The coach-player duo share a bond that has not been broken since Bridgewater's departure from Minnesota.