The Broncos unloaded the Brink’s truck to land the nine-time Pro Bowl quarterback, signing him to a seven-year deal worth $254 million with $165 million guaranteed. That was after Denver sent three players, two first-round picks and two additional picks in a blockbuster trade with the Seattle Seahawks.

However, after five games, Wilson has not lived up to his billing. The Broncos have scored the second-fewest points in the league behind Wilson who has turned 3-of-10 trips in the red zone into touchdowns.

He punctuated the team’s struggles scoring on Thursday night against the Indianapolis Colts, throwing a pair of interceptions in scoring territory and failing to convert from five yards out in overtime, leading to a 12-9 loss to the Colts on October 6.

Wilson, playing for a new team for the first time since he entered the league a decade ago, has struggled to win over Denver. Between fans walking out before the game ended or photos of teammates’ frustrations going viral, it’s been a tough start for Wilson — and former Vikings linebacker Ben Leber made a strong case why it’s been a tough trot for Wilson so far. 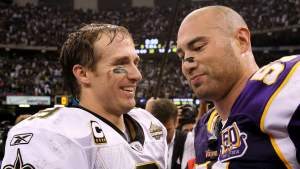 Appearing on KFAN’s #92Noon radio show with Paul Allen on October 6, Leber, who played for the Vikings from 2006 to 2010, ripped Wilson in an epic rant ahead of the Broncos quarterback’s primetime meltdown.

Behind the scenes, Leber said he’s only heard great things of Wilson, but the former Vikings linebacker has taken issue with the public persona Wilson has adopted since he developed his alter ego, “Mr. Unlimited.”

When they ask u somethin'… tell 'em ur….. #UNLIMITED pic.twitter.com/832yylOTjy

“Once he started to start doing commercials and really started putting himself out there I just thought he was really trying too hard to be like Peyton Manning,” Leber said on KFAN.

“I know people that have played with him early in his career — I don’t know as of recently. Honestly, they couldn’t say enough good things about him,” Leber added. ” ‘Russ is great. He’ll sit down and talk with anybody. He’s a super cool guy. The team loves him…’ But all the stuff that he puts out of himself, if that’s the case of who you are behind the scenes, this is who you are in front of a camera, it’s the complete opposite.”

Leber unloaded from there, calling Wilson out for being impersonal and “out-of-touch.”

“This guy’s so out of touch. He’s really, really cringeworthy all the time,” Leber said, speaking of the public image Wilson projects. “You’re a guy I’d never want to sit next to, you’re the most out-of-touch, egotistical, self-centered person I’ve ever seen promote themselves like that, and he continues to do it.”

Here’s the meat of Leber’s rant, per KFAN:

He gets his superstar wife to be his biggest enabler and cheerleader and she’s in the background hyping him up. Whoever’s on your marketing team needs to be fired. Everybody needs to be fired…

I can already see this house of cards support for him crumbling all across the country. He’s just panned and clowned across social media and he thinks it’s cool. Buddy, they’re not laughing with you, they’re laughing at you. And he still doesn’t get it.

It’s all self-inflated propaganda. Every video he comes out with there is no sincerity. He’ll try to make a video of himself going to a game and it was the most contrived, ridiculous, manufactured non-genuine thing I’ve ever seen and he tries to pull it off like he’s [Leonardo] DiCaprio.

Leber, who also balances his private and personal persona as a broadcaster and sideline reporter for Vikings.com, offered Wilson some advice after much critique.

“Be a human being. He’s so worried about what his persona’s going to be I don’t know if he’s got to pander to his sponsors. He’s more concerned about his image. Be a person, be who you are. Be in the moment. If the game sucked, act disappointed. You don’t have to put a smile on your face and be Mr. Unlimted all the time,” Leber said.

In his “Mr. Unlimited” video from 2018, Wilson introduced himself, addressing the stigma he is “robotic” or impersonal — a similar stigma Kirk Cousins has faced since he arrived in Minnesota.

Cousins at the age of 34, has been more measured and less contentious in public since his “you like that” outburst in Washington. It’s come at the cost of him seeming cold and sometimes unconcerned with the success of the team over the past four seasons in Minnesota.

However, that part of Cousins could have been a byproduct of the “fear-based” culture within the Vikings organization under Mike Zimmer.

Cousins has noticeably been more candid in his interviews and more willing to crack jokes with the media — and this week may have been one of his most entertaining interviews as a Viking yet.

Cousins, addressing a viral video of him wearing left tackle Christian Darrisaw‘s chain on the flight home from London following a win over the New Orleans Saints, Cousins didn’t shrug the moment off one bit.

“I had never actually put a chain on, so that was my first experience of what that feels like,” Cousins said in an October 5 press conference. “Honestly, it was very empowering. It felt pretty good to have that chain on.”

Here’s the full story from Cousins, describing a positive experience on the London trip despite him facing some early-season struggles of his own.

“I wore his chain for a little bit, Kris Boyd put that on me. I had never actually put on a chain… it was very empowering.” 😂😂 @FOX9 pic.twitter.com/yXUKLARHdM