Getty Derrick Henry shared his condolences with Dalvin Cook this week after Cook lost his father.

The NFL rushing title is coming down to a two-man race: Derrick Henry vs. Dalvin Cook.

The Tennessee Titans power back is the reigning champion and currently leads the league with 1,079 yards on 229 carries in 10 games played. Cook, the challenger, has played nine games — eight-and-a-half if you count his exit after the first half in Week 5 against the Seattle Seahawks — and has 201 carries for 1,069 yards on the ground this season.

Cook and Henry surpassed the 1000-yard mark last week with the next closest back being Las Vegas Raiders‘ running back Josh Jacobs (755 rushing yards).

Separated by just 10 yards, the duo will be stacked against each other the rest of the way in one of the closest races for the rushing title since 2013 when LeSean McCoy led Adrian Peterson by 12 yards with six weeks left in the season.

Henry issued a notice to the league about his thoughts on the Vikings running back, knowing his crown is up for the taking this season.

“He’s the best back in the league and is having a phenomenal year,” Henry said on Wednesday, per ESPN’s Turron Davenport.  Running the ball, catching the ball; he’s very explosive. Runs hard, runs through tackles, makes guys miss. He’s been balling.”

On the surface, it’s one of what could be many compliments exchanged between the two, but the underlying message is clear: Game on.

Cook, the Lead Runner in All-Purpose Yards, Isn’t Comparing Himself to Anyone 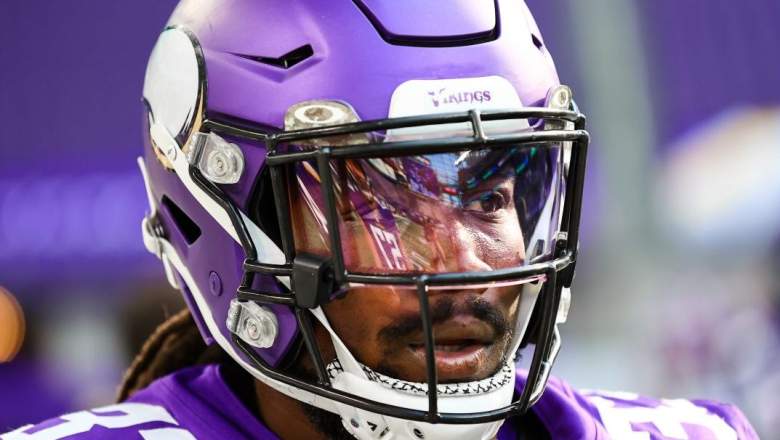 Courtesy of VikingsDalvin Cook leads the league in all-purpose yards this season.

During the offseason, both running backs were negotiating contract extensions — a process that often sees a player’s value compared to their peers. Henry received a four-year, $50 million contract in July, resetting the running back market as Cook’s camp was still at the negotiating table.

“Those guys deserve what they got. I never want to compare myself to those guys,” Cook said of the several running backs who signed lucrative deals in 2019. “I put myself in a category of my own.”

In September, Cook signed a five-year, $62.5 million contract, scaling up to roughly the same $12.5 million average annual salary that Henry earned — and Cook is proving his worth.

Through 11 weeks and at least one less game dressed than the next 15 players, Cook leads the league in yards from scrimmage (1,303), adding 234 receiving yards to his rushing total. He’s averaging 10 more yards per game than Henry and leads the league with 13 rushing touchdowns.

He also is the NFL’s fourth-leading scorer — an anomaly in a statistic often led by kickers — with 90 points on the season. Fourteen kickers separate Cook from the next highest-scoring skill player, New Orleans Saints running back Alvin Kamara, who has 72 points this season.

Kamara also signed a new deal this past offseason, becoming the second-highest paid running back in the league by securing a $15 million average annual salary, trailing only Carolina Panthers running back Christian McCaffrey’s $16 million a year deal.

Cook is outperforming them all.

While most fans took Henry’s praise as just a humble gesture for the press, one Vikings fan countered that he was just speaking as a matter of fact.

On the opposite end of the spectrum, one fan’s exaggeration may be fitting of any player in the league who continues to compete and strive to be the best at their position.

That’s humble way to say I’m better than him & he won’t get the rushing title until I retire.

Regardless of interpretation, it’s clear Henry has respect for his adversary as the two compete in one of the closest rushing title races in the league in recent memory.

Humble ass guy.. I know what you really mean tho 😉 https://t.co/XXq0YIeXLf

The King has class. #Titans https://t.co/d2PjbiEsqw