And just like that, history repeats itself. Another embarrassing loss for the New York Jets in a primetime appearance.

The defeat was in no way his fault, but the Mike White hype coming into the game did feel too good to be true. For some cruel reason, a higher power seems to have decided that Jets fans can’t have nice things and the backup quarterback was a very nice thing for about half a week.

In case you missed it, White left the game with a forearm injury on his throwing side. He went one for two on possessions with one touchdown pass and one punt, a solid outing by all accounts. The defense responded with one of the most pathetic performances this season — up there with Week 7 in New England — and hope was snatched from this fanbase once again.

As a diehard fan, the result of the game upset me of course but not nearly as much as a simple tweet that occurred in the third quarter.

With Jets nation already feeling the sting of a lifeless effort on defense and another quarterback injury, Bleacher Report’s football division B/R Gridiron decided to stir the pot on Twitter with a misleading photo of Zach Wilson laughing at a comment from Corey Davis while the team is losing 42-10. The tweet had no caption and has since been deleted. 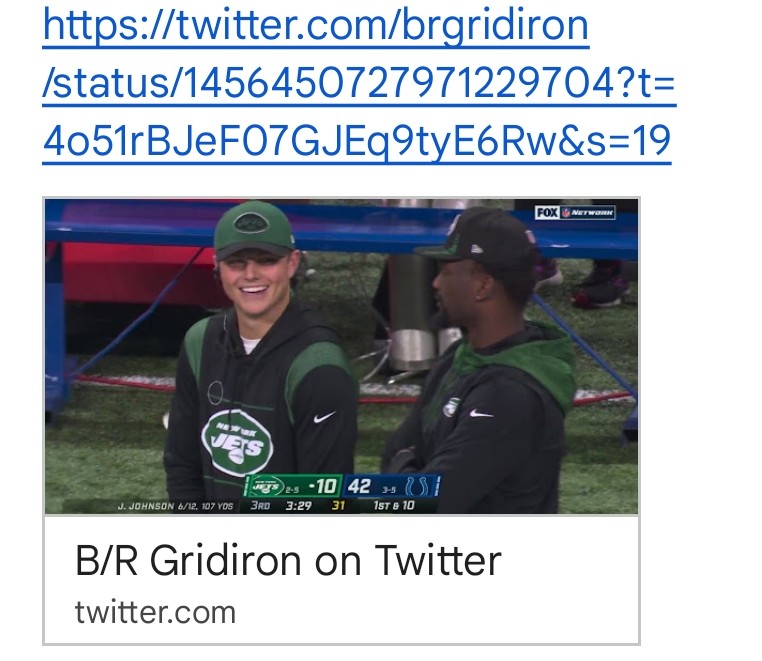 Twitter @brgridironA deleted tweet with no caption from B/R Gridiron (@brgridiron) shows Zach Wilson laughing at a comment by Corey Davis with the New York Jets down 42-10.

Now, some fans may react that two team captains should not be laughing during a blowout, no matter the circumstances and of course, that’s a fair assessment to some extent. However, I watched this sequence in real-time and it was obvious that Wilson laughed at a comment from Davis.

Who knows what that comment was, but you can bet that it wasn’t regarding the outcome of the game and it didn’t occur after an injury or an Indianapolis Colts touchdown. It was during a slow moment and for whatever reason, Wilson chuckled for a couple of seconds before crossing his arms again in defeat.

Of course, all it takes is one simple out-of-context still image and it looks like Wilson and Davis are bad teammates — and Jets fans weren’t having it. Many users responded in outrage, including beat reporter DJ Bien-Aime, who is actually a diehard Miami Dolphins fan.

Zach Wilson aint playing he supposed to be pissed off and mad the whole time because his team losing. Get the fuck out of here dawg with that weirdo ass tweet trying to go out of your way to make Wilson look bad.

More chimed in like NYJ Matt and Adam of TheJetPress.

Back to back L’s

They posted a picture of Zach Wilson laughing with Corey Davis on the sideline down 30.

Everybody dogged them and they deleted it.

I also came to the rookie’s defense, for the record.

come on now, why y'all always trying to slander this man. #Jets

Wilson has been a target of the media since draft night, and one has to wonder if it has anything to do with the franchise he was drafted by. For example, Mac Jones can do no wrong with the Patriots, Trey Lance highlights never mention the score, and Trevor Lawrence is still the golden child of the league despite a similar one-win record.

Jets hate is common across media outlets so it only made sense that Wilson would fall subject to that immediately after joining the franchise. We can all take that, we’re used to it.

What ticks the fanbase off in my experience is the media trying to cause problems that don’t exist. When Wilson was drafted, the bogus narrative was that he’s a terrible teammate. “That’s why he wasn’t a captain his final season at BYU,” talking heads proclaimed.

Of course, it was a total lie. Wilson explained that he wasn’t a captain his junior year because he was battling for the starting job at the start of the season after an injury his sophomore campaign. “Why would someone vote for me to be the captain if they didn’t even know if I was going to be a starter,” the QB responded on WFAN’s Carton & Roberts, “I felt like it was something I had to earn, I had to prove to my teammates that I was capable of being a starter and capable of being a leader.”

Then a few months later, the rookie was voted as one of the two offensive captains by his Jets peers at age 22. As mentioned above, they voted Davis as the other one.

Teammates and coaches have lauded the signal-caller all season for his high character, hard work, professionalism and leadership. White even noted that Wilson “might’ve been more juiced up” than him after the backup outshined him with a record-breaking performance in Week 8.

Zach Wilson was the first person to congratulate Mike White after yesterday's game:

"He honestly might've been more juiced up than me" pic.twitter.com/fiRH2wsU9L

In a social media world like ours where everything you do is watched and recorded, it’s hard not to slip up. Wilson has to remember to frown and pout the entire game the next time the Jets get killed, maybe flip a table for good measure. Otherwise, that footage will be featured by some news outlet or another that’s looking for a headline.

These media narratives are intended to tear this fanbase apart, don’t allow them to.