There are certain perks that come with being a starting quarterback in the NFL and one obvious advantage is the endorsements.

New York Jets rookie Zach Wilson is learning more and more every day and in Week 12, he got a friendly lesson from German manufacturer BMW — always arrive in style.

Upon landing in Houston, Wilson was greeted with a flawless BMW M3 sports car with a Gotham Green paint job. The first-year signal-caller posted a photo of the fine piece of machinery on his Instagram story, thanking BMW with the hashtag #AD underneath.

Wilson captioned the picture: “M3 in the perfect shade of green.” 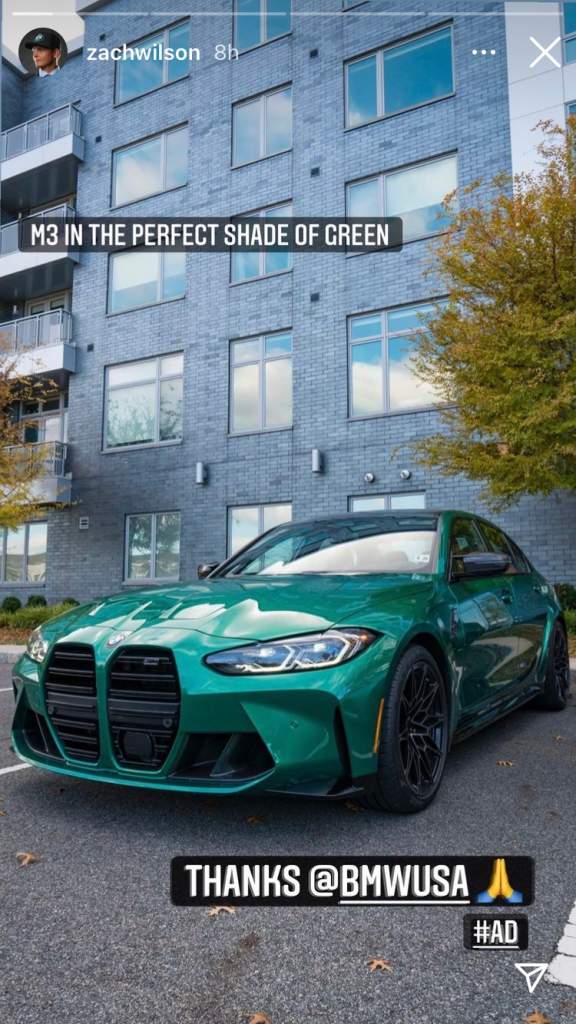 @zachwilson on InstagramZach Wilson was provided with a Jet-colored BMW M3 in Houston.

Talk about a rookie bonus. BMW shelled out more of a commitment than Jets owner Woody Johnson during Wilson’s contract negotiations this summer.

They even got the color down to the “perfect shade,” as the BYU product noted. Toto, I have a feeling we’re not in Utah anymore.

Can the Play Match the Look?

There’s little doubt that Wilson has the look of a franchise quarterback — the clean-shave, blonde hair and shiny white chompers — but Jets fans care more about the on-field product.

The franchise has been looking for its savior ever since Joe Namath’s run ended in 1977. Of course, an M3 BMW would fit Broadway Joe’s image as much as anyone, but how Wilson plays on Sunday will matter way more in the long run than what car he showed up in on Saturday afternoon. 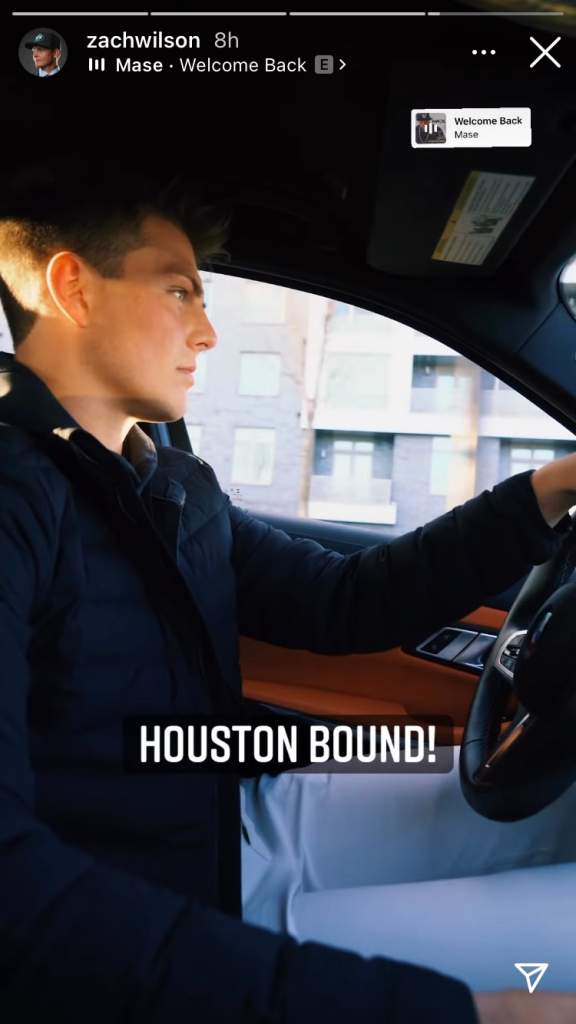 @zachwilson on InstagramZach Wilson drives an M3 BMW on his way to NRG Stadium.

This fanbase grows less patient by the day and early inconsistency from the rookie has made some question his future in this league. A sleek sports car probably won’t help convince the non-believers but a Week 12 win might be a good start.

No matter what happens against the Texans though, it’s important to remember that Wilson is a wide-eyed 22-year old that has shown a willingness to learn at every step of the way. Many around the organization feel he’s just scratching the surface as he adapts to the professional level.

The rest of the 2021 season will be dedicated to developing his game and harnessing his true potential as the Jets look ahead to 2022 and beyond. In other words, it may be “all gas no brakes” in the BMW but head coach Robert Saleh and LaFleur will most likely take things slow when it comes to Wilson.