Sean O’Malley’s bout against Pedro Munhoz ended early with a no contest because of an eye poke, but that wasn’t the only clash the brash bantamweight had at UFC 276. O’Malley was confronted by former bantamweight and flyweight champion and Olympic gold medalist Henry Cejudo while he was being interviewed backstage.

Cejudo, who last fought in 2020 and left the UFC with his bantamweight belt, has been hinting at a return to the Octagon. He interrupted O’Malley and the two exchanged a few words at T-Mobile Arena in Las Vegas on July 2. O’Malley was hoping to move up in the rankings with a victory over Munhoz. But the fight ended prematurely about two minutes into the second round after O’Malley poked Munhoz in the eye. Munhoz could be heard telling a doctor and referee Jason Herzog that he couldn’t see out of his eye.

Cejudo, the self-proclaimed “King of Cringe,” re-entered the USADA testing pool in April, according to ESPN, making him eligible to fight again. Despite his confrontation with O’Malley, Cejudo has said he would only return to the UFC if the bantamweight belt was on the line. He said on the “Triple C and Schmo Show” in June he expects to fight for a championship in his comeback.

During his post-fight interview with reporters at UFC 276, O’Malley was asked about the run-in with Cejudo. O’Malley responded, “That little fat a** should stay retired. He’s running around drunk in the backstage, he got escorted out. Tripping over things, running into things, looks like he’s on drugs. I don’t know if he’s having a midlife crisis or what.”

O’Malley added, “He mumbled some words. Is that realistic? Does Henry come back? He looks fat as s***. What does he want to fight in three years? I don’t know.” O’Malley, meanwhile, said he he’s not thinking about his next fight camp right now.

C4 is in the building! #UFC276 pic.twitter.com/QZNGILnNCE

O’Malley said he thought the no contest was the “best case scenario” for Munhoz. “I was piecing him up. I was way faster then him. He couldn’t hurt me, couldn’t hit me.” According to the three judges scoring the fight, Munhoz won the first round 2-1. 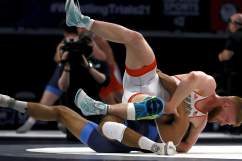 Highly Touted Prospect Could Join the UFC Roster Soon: ‘This Guy’s a Beast’

Henry Cejudo @HenryCejudo was escorted out of backstage after he interrupted Sean O’Malleys post fight interview.

Cejudo could be heard in a video posted by ESPN Deportes’ Carlos Contreras Legaspi, “Hey Sean, if you want a matchup, he’s right here. I’d love a tune up. What do you say, precious? … I’m good to go. … I think you absolutely suck.”

Cejudo also had a showdown with UFC Bantamweight Champion Aljamain Sterling on July 1, a day before UFC 276, in the parking lot of the arena, according to a video posted on Twitter by Cejudo. He could be heard in the video saying to Sterling, “You’re not only going to bend one knee, you’re going to be bending two knees.”

Cejudo tweeted, “I’m ready right now Alja-shit stain. Gimme ALL the smoke. You can’t run away forever. You have something that’s mine. Spit shine it nice and pretty for me in the meantime. Triple C is back baby!” They also traded words in the arena:

Sterling tweeted, “He’s not ready!!” According to ESPN, a title fight between Sterling and another former champion, TJ Dillashaw, could be next, but Sterling has not signed a contract for the fight to happen. 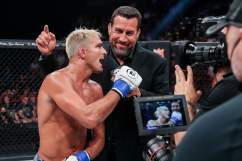 Loading more stories
wpDiscuz
0
0
Would love your thoughts, please comment.x
()
x
| Reply
Sean O'Malley and Henry Cejudo clashed backstage at UFC 276 after O'Malley's fight against Pedro Munhoz ended in a no contest because of an eye poke.