Former UFC interim lightweight champion Tony Ferguson is on the worst skid of his MMA career, but if a fan tells him to retire, they may get a scathing response.

“El Cucuy” fought during last weekend’s UFC 274, drawing Michael Chandler in the night’s featured bout. Ferguson was on a campaign to halt his three-fight losing streak against the former multiple-time Bellator lightweight champion, and the 38-year-old fighter looked good in the first round, landing solid shots and dropping Chandler.

“Iron” spent nearly half the round on top of Ferguson, but El Cucuy landed punishing blows from his back as well.

However, the fight ended moments into the second frame after Chandler landed a devastating head kick. Ferguson fell to the canvas unconscious and the referee stepped in before Iron landed any other strikes on his downed opponent.

Ferguson is now 0-4 in his last four matches and when the UFC updated their official rankings earlier this week, Ferguson slid down to the No. 10 spot.

Ferguson Ripped a Fight Fan Who Told Him to Retire

Don’t expect to see Ferguson call it quits after the brutal KO. On Wednesday, El Cucuy shared a photo of himself that was taken a week prior to the UFC 274 fight week. He wrote:

“Back-2-Work” Picture Taken April 29, A Bout A Week Before Fight Week Weighing In Around 165-168lbs. I Will Be Posting More Media From Fight Camp & Future Camps. Always Kept It To Myself. This Is The Camp To Build Off Of, Not Gonna Waste It. No Fast Food Unless I’m Chasing It Down – Champ -CSO- 🇺🇸/🇲🇽 # Time2BuildAgain Phukin’ A Right # CuttingWeight.

Ferguson’s post sparked thousands of likes and hundreds of comments. But not all of the comments El Cucuy received were positive. One UFC fan wrote: “RETIRE,” which elicited a response from the combatant.

“No F****n’ Chance Casual, You Must Be New Around Here,” Ferguson wrote, along with the middle finger and man in sunglasses emojis. See a screenshot of the exchange below: 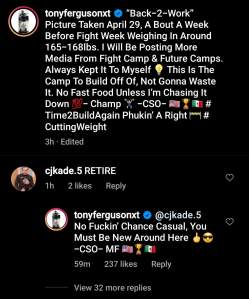 GettyTony Ferguson responded to an Instagram user who told him to retire.

Other fight fans took to Ferguson’s Instagram post, with many sharing their respect for the fighter. But, some also echoed the call for El Cucuy’s retirement, while others gave career advice. One person wrote that Ferguson should consider dropping to featherweight for his next fight.

In his 32-fight professional MMA career, Ferguson has never been knocked unconscious except for the Chandler contest. And even though it’s a tough loss to swallow, El Cucuy recently tweeted that he’s “hungry again.”

Sharing a photo of Chandler getting his hand raised at UFC 274, Ferguson tweeted on May 8: “Congratulations to @MikeChandlerMMA On his victory at UFC 274. Had lots of fun in there, you fans are F*****n’ wild I love this s***! Feels good to be back & hungry again. We were just getting started. Best Of Luck In Your Next Fight- Champ # ForTheLoveOfTheGame.”

Congratulations to @MikeChandlerMMA On his victory at UFC👣274. Had lots of fun in there, you fans are Fuckin’ wild I love this shit! Feels good to be back & hungry again. We were just getting started. Best Of Luck In Your Next Fight- Champ # ForTheLoveOfTheGame -CSO- 🇺🇸🏆🇲🇽 pic.twitter.com/cp6trgSPoX

Loading more stories
wpDiscuz
0
0
Would love your thoughts, please comment.x
()
x
| Reply
Former UFC interim lightweight champion Tony Ferguson is on the worst skid of his MMA career, but if a fan tells him to retire, they may get a scathing response.