One question you may be asking while you watch Twin Peaks is: Who exactly is Bob? Well, since he will likely make some kind of appearance again this season, it’s important to review who he was in the original series.

This post will contain spoilers for Season 1 and Season 2.

According to Esquire, David Lynch and Mark Frost wanted enough ambiguity for Bob to be both an actual demon that possesses people and a metaphor for what happens when a family has years of horrid abuse in its history. Lynch told Esquire:

People can see BOB however they want, and one of the things we explicitly stated at one point in the old show was that maybe it was just a way of putting a terrible story into a form that we could cope with, or maybe it was something real. We’ve always decided it’s best to let viewers make up their own minds about that stuff.

Bob Is Part of a Group of Spirits

The Man from Another Place (ABC)

A big part of Twin Peaks involve spirits who work behind the scenes, and Bob (sometimes spelled BOB in all caps) is one of them. Bob and Mike, another spirit who played a pivotal role in the first two seasons, were once partners in evil, committing murder and rape together. Mike had a religious epiphany and repented, cutting off his arm to get rid of a “Fire Walk With Me” tattoo that symbolized being touched by a devil (according to the wikia.) Mike now inhabits one-armed Philip Michael Gerard. (Or at least, he did during the first two seasons.)

Mike later decided that he needed to stop Bob. Bob always inhabits a person (most recently Leland), but Mike only sometimes does, during the times that he needs to stop Bob. He said once that Mike was his “familiar” and more of a parasitic spirit that fed on fear and pleasure. Only “the gifted and the damned” can see the true face of Bob, Mike says. (This includes the Palmers: Leland, Sarah, Maddy, and Laura, who have all seen Bob’s true face at one point.)

In addition to these “spirits,” we also have the midget (The Man From Another Place). There’s some debate about MFAP. Some think that he is Mike’s spirit, just as Bob is the spirit controlling his hosts, and MIKE is just a misnomer from the host that MFAP inhabits. MFAP told Cooper that he is “the arm” (referring to Mike’s arm.) So he could be currently inhabiting Mike in Seasons 1 and 2, just like Bob inhabited Leland.

However, the garmonbozia fight (see below) makes this seem less likely. It’s more possible that Mike is a separate spirit entirely, who inhabits Philip like Bob inhabits Leland. But MFAP, while he can control Bob from time to time, cannot control Mike because Mike cut off the arm when he had his religious epiphany. This might also mean that MFAP is some type of devil and the ultimate leader of evil in this story.

In Fire Walk With Me, we learn again that the spirits (or at least Bob) feed off of pain and suffering. Creamed corn (i.e. garmonbozia) is their symbolism for the pain and suffering that they eat.  At one point we see MFAP eating creamed corn that he forced Bob to take from Leland. This was after MFAP had a fight with Bob over stolen garmonbozia. Bob and Mike were supposed to collect it and bring it to the MFAP, but Bob ate it for himself instead.

MFAP told Cooper in the finale that the next time he saw him, he’d look different. This likely indicates both the midget and his host will have a different appearance this season. Bob likely will too.

Bob is scared of no one but Mike. However, there are things of the world that affect him. For example, he’s drawn to adrenaline activities and will push his host to do things for the sake of danger. He’s also drawn to certain types of music, like the music that Leland would play when he killed Maddy and drugged Sarah Palmer.

Bob is also scared or “disabled” somehow by a certain ring that Teresa Banks once wore. It’s an Owl Cave Ring and is gold with a jade stone in the center, engraved with a symbol from the Owl Cave. It’s linked to the MFAP. According to the Twin Peaks Wikia, people who have been in contact with the ring include: White Indians living near Twin Peaks, the Chief of the Nez Perce who believed no one should ever wear the ring, Meriweter Lewis who stopped wearing the ring after a troubling vision, James Neely who stole it and disappeared, Jack Parsons who wore it and could contact the Lodge’s spirits and began saying the “Fire Walk With Me” chant. Other people who wore the ring included President Nixon, Teresa Banks, Special Agent Desmond who disappeared after finding it, and Gerard who throws the ring at Laura during Bob’s ritual. MFAP also gave the ring to Laura in a dream, but Cooper told her not to take it. It disappeared from her hand. She later got the ring again when Mike threw it at her. That ring somehow kept Bob from inhabiting Laura (as the theory goes), so he killed her instead.

There’s also a scent associated with Bob. When he’s been around, people report smelling burnt oil (such as when Leland killed the man he originally thought had killed Laura.) Burnt oil also somehow holds the key to opening the gate to the Black Lodge/Red Room.

What do you think about Bob? Did we leave out anything important? Let us know in the comments below. 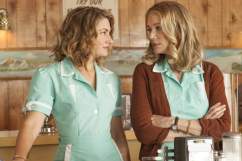 ‘Twin Peaks’ Then & Now: Photos of the Original Cast Over 25 Years